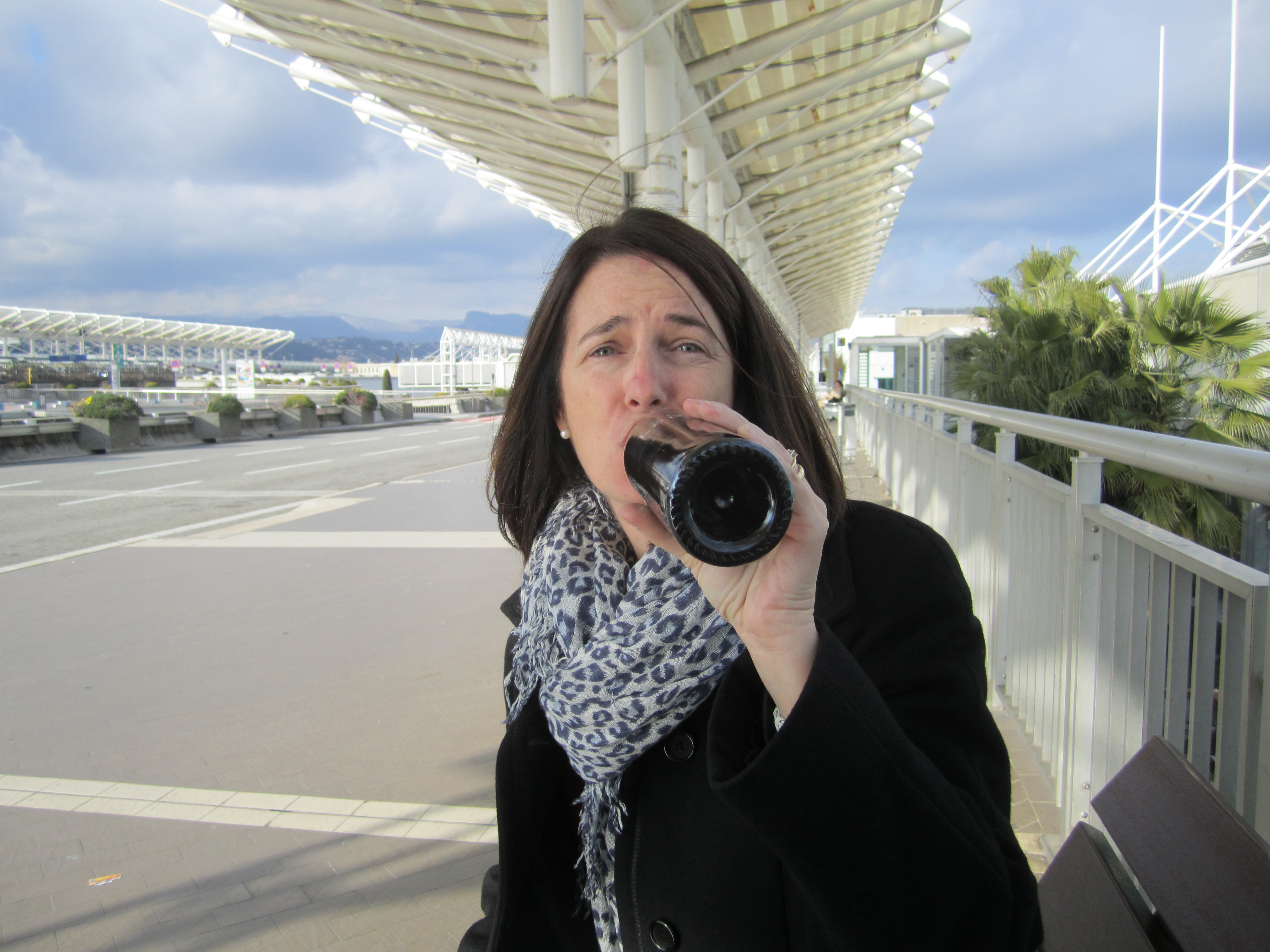 Damaged Luggage, Sometimes Travel Can Drive Me to Drink! 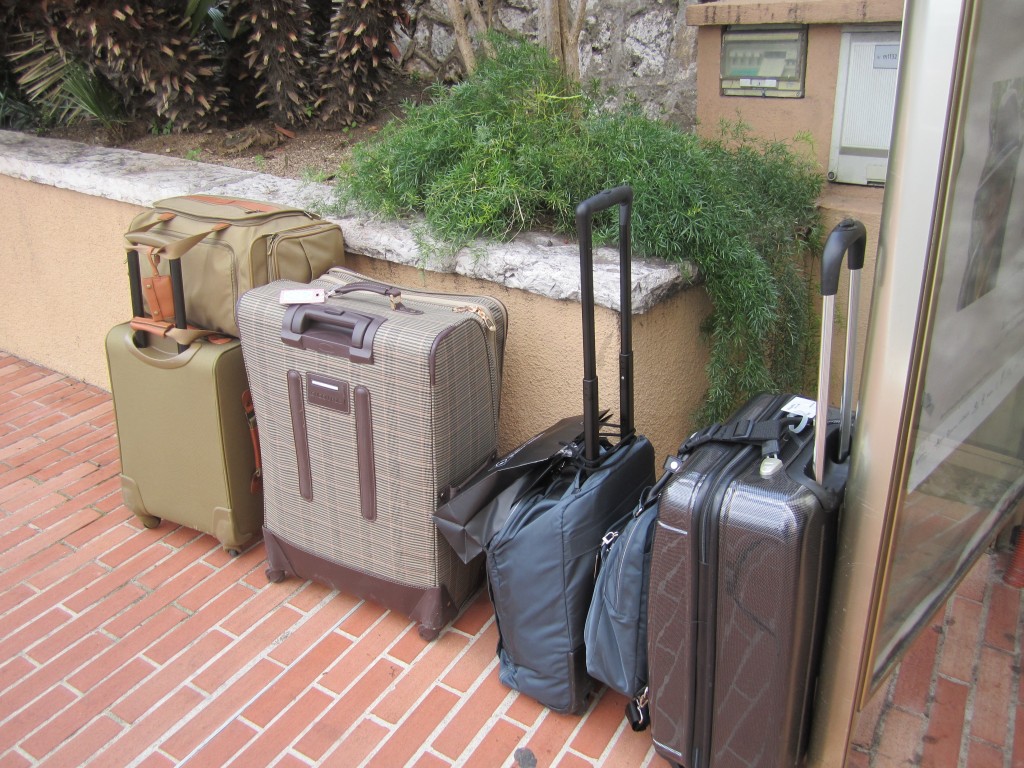 The before shot at the bus stop waiting to head to the Nice airport.

Damaged Luggage can ruin a trip, if you let it

Gal Pal Elizabeth and I were spoiled beyond belief hobnobbing with the rich and famous in Monaco while staying at the fabulous Fairmont Monte Carlo, but it was time to head to Paris and Milan to hook up with our other gal pals waiting to set Europe on fire.

We had spent more than we budgeted for on taxi cabs, and feeling guilty about it, decided to be low-maintenance by taking the bus to the Nice airport. The bus stop is directly across the street from the Fairmont and drops  passengers off at the terminal for Air France. What could be easier? Wrong, and I have the damaged baggage to prove it!

We were the only ones on the bus – should have been our first indication that things might go awry. Did the locals know something we didn’t? Our bus driver was annoyed from the get-go that the circus was in town as well as a football match (soccer to you and me) which created an undue amount of traffic standing in our way to a smooth ride to the airport. He was cursing under his breath and shouting at times to the seemingly oblivious pedestrians crossing streets and other drivers trying to make their way around the rotary’s.

Monaco is full of twists and turns and there is only one road in and out of the city towards Nice. We were commiserating with him and were genuinely happy for him when we broke free of the gridlock and headed onto the freeway. That’s when things went horribly out of control. 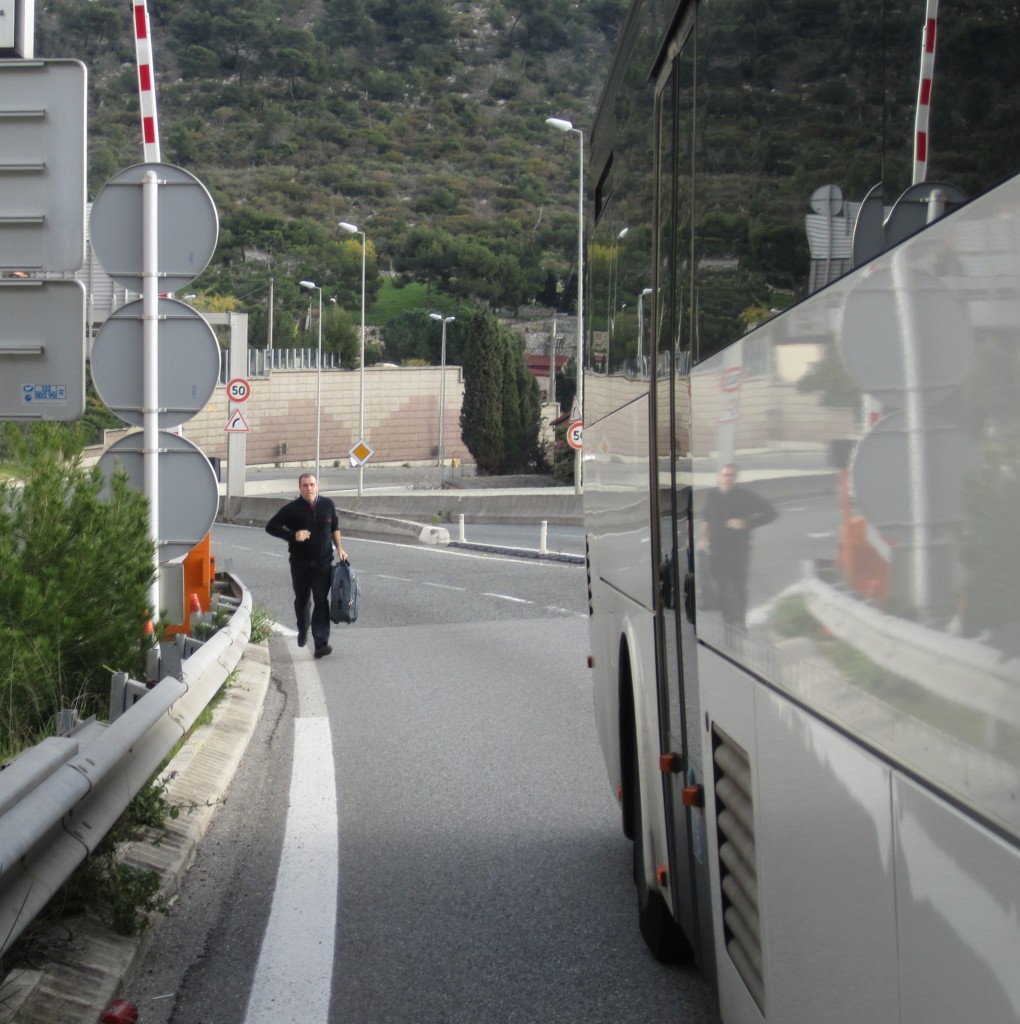 Who says taking the bus is cheaper than a taxi? Not when your bag gets road rash!

Speeding along at a good clip, he suddenly slammed on the brakes and pulled off to the side of the freeway. He then opened the door and got off the bus. A car had pulled up right in front of us and Elizabeth and I were perplexed. He came right back on the bus and began yelling, “How many bags did you have?!” I answered, “Four.” He then said, “Get off the bus!” As I stepped off the bus, with Elizabeth in tow, I heard the driver of the car, who at this point had exited his car and was coming over to the bus, excitedly scream to us, “Le baggage, le baggage” while pointing his fingers down the road.

In an instant I processed what had happened…I looked left at the man from the car, and then looked right to see that the doors to the luggage compartment on the bus were open revealing three bags, not four and then my eyes spied a small object in the middle of the highway way far away and knew it was one of my pieces!

Quick Priscilla, think…was my laptop still in that bag or had I really taken it out at the last second thinking I should carry it on the bus? Yes! I knew my laptop was safe, but still the rest of my important items were lying in the middle of the highway with cars dodging around it. “How long would that last?” I wondered and with my adrenaline pumping began to sprint down the highway to retrieve my bag. The driver caught up to me and waved me back to the bus as he began an all out dash weaving in and out of lanes trying to get my bag. The journalist in me made me run back to the bus to retrieve my camera to document this horror and perhaps to have proof in case the bus company needed it. 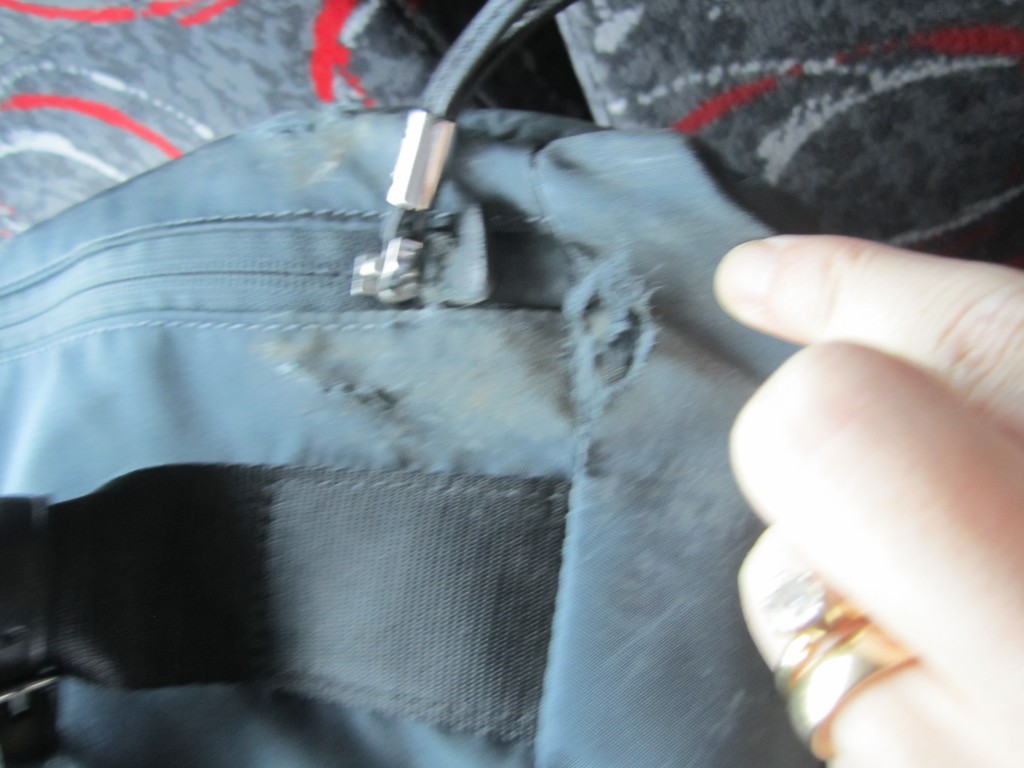 Already beaten up by the airlines, my brand new bag was clearly torn up by this up close and personal view of the highway!

Damaged luggage in hand, we boarded the bus and began to evaluate the severity. What the airlines had started, the trip down the highway finished. My brand new carry-on bag was a goner.

I photographed the damage and began a dialogue with the driver in my best high school French. I remained clear-headed and began to access my options. The driver said I could make a claim with the bus company. Yeah, I knew exactly how that would go. I would be without a bag and no compensation or at best, it would take months to get through the red tape and cost me gobs of time and money in telephone bills and still I would have to purchase a bag in Europe losing money on the conversion rate.

Suddenly it struck me, the driver had more to lose than I did by making a claim. I was sure his boss would not appreciate that he had failed to secure the luggage doors causing this problem and I was fairly sure that when they heard about his behavior driving, it would finish his career. So, I suggested a compromise. I pulled out my iPhone, looked up the exact bag on the website and showed him the price. He agreed to pay me for a new bag himself and I agreed to not report him to the bus company. He seemed genuinely sorry and I had no interest in seeing him lose his career, but I did need to purchase a suitcase because this bag would not hold my items securely. 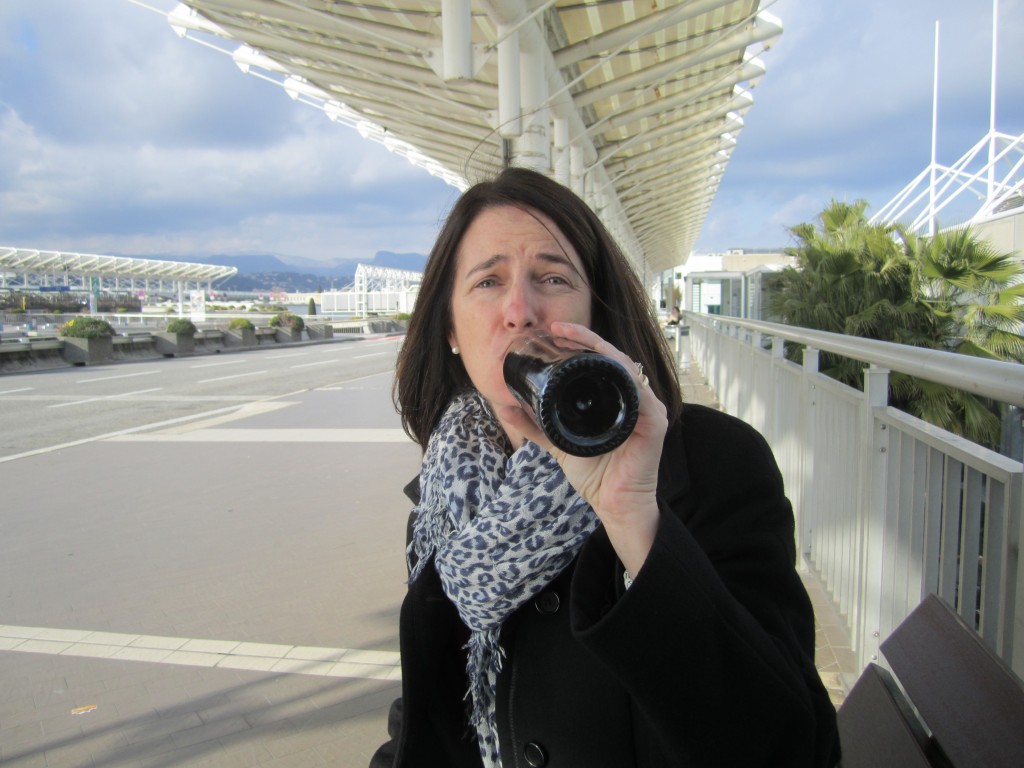 When travel can drive me to drink this is what happens!

Driving me to drink

We left the curb, money in hand to check-in for our flight feeling badly for both the driver and me. The Air France check-in worker was not willing to take the bag, as is, at check it and asked what happened. With my broken French and a lively reenactment of the scene, he howled laughing and steered me towards a shrink wrapping station for my bag. Once we accomplished that and had it safely on its way to Paris, we did the only thing two self-respecting women who were emotionally drained could do…we opened up that nice bottle of wine from our welcome gift at the Fairmont. We sat outside in the sunshine at the curb at the Nice airport and drank it right from the bottle!

All in a glamorous day’s work for Weekend In Paris!

Sounds like you have had some interesting times and I’m glad to hear I am not the only one who deems it okay to drink directly from the bottle when times are tough! Isn’t funny how we don’t remember the mundane, easy-going trips where nothing went wrong, but the crazy out of the box ones? Laughter and wine really are the best medicines!

Thanks for reading and taking the time to write in Carol! Always love hearing from you.