01 Apr Packing my Humanity along with my Bags to Paris 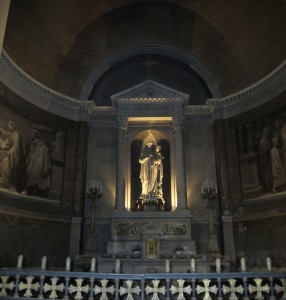 Being bombarded with requests from beggars in any city can be an annoyance or a blessing in disguise. I read a post today by fellow travel blogger Earl of Wandering Earl who wrote about encountering people who are selling their wares with great “aggressiveness” or simply sitting with a sign asking for money because they are homeless. It reminded me of a recent encounter  at the former Abbey St-Germain-des-Près with a homeless man in Paris that had me in tears – good tears…

The oldest church in Paris, St-Germain-des-Près whose columns date back to the sixth century is located across from the famous Cafe Les Deux Magots and is a church that I had not entered in many, many years. The Gal Pals were called to visit here on this trip for unknown reasons. I can’t remember who suggested it, perhaps it was brought up by our tour guide along our Baguette to Bistro tour that day. I honestly can’t remember, but in any event we doubled back and headed over for a peek inside. 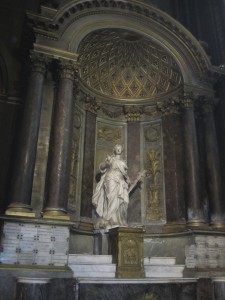 Just outside the ominous doors an elderly man was sitting outside with a small sign asking for money next to a raggedy old cup that had some small change in it. I walked right past, and entered the stark and cold church. My first thought was that the church was very dark despite the sun shining brightly outside. Dimly lit, it was difficult to see the many treasures contained inside. I took a few photos, but not many as it was difficult to focus on them. I read about the impressive history of the church and noticed a plea inside for money for the continued restoration of the building and its artifacts. Then, I crossed off another “must see” in Paris in my mind and prepared to leave. 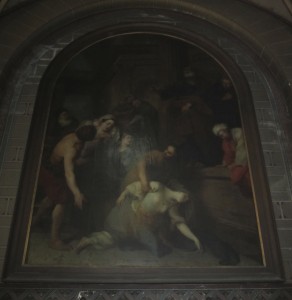 But something was bothering me inside the church and my heart was heavy. Just before walking out, an ominous thought struck me. I had entered this holy place expecting to feel good in my heart as I often do when taking the time out to commune with God in holy spaces, but this time I felt sad. I was the last to leave the church, hesitating because something wasn’t right. Then, as I pushed open the heavy wooden doors there was the reason why. I had entered the church for selfish reasons, it dawned on me. Right there on the cold slab stairs leading to the entrance was the homeless man I had dismissed on the way in. I knelt down to place some change in his cup and he picked his head up seemingly surprised that I didn’t just keep walking, looked straight into my eyes and I into his. I was awestruck with his piercing, beautiful, sharp blue eyes and tanned prominent strong brow. His hair and beard were steel gray and he reminded me of Charlton Heston in the movie about Moses and the Ten Commandments. His face was bathed in sunlight and his smile was brief, but so warm and tender. 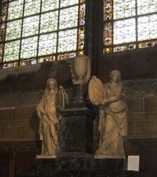 I reached out to shake his hand not knowing if he would return the favor. His huge hands were clean and soft on the underside and rough and weathered on the tops. He said thank you as we shook and gave me a faint “God bless you” and it made me well up with grateful tears for the encounter. I felt a warm, tingly sensation and knew that I had been taught a very important lesson. I am in Paris and other parts of the world to connect with other human beings, not just to marvel at what human beings had created with their hands. It’s what is the heart of the city – the people, that I am meant to encounter.

Dignity in the human person is something that I personally need to remember as I go about my daily travels, both home and away. I should pack my humanity along with my baggage on every trip. I need to carry it with me on my travels and keep vigilant to respect everyone I encounter. I was blind, but now I see and I am a traveler changed forever!

Paris 75006
All photos property of Weekend In Paris. Must obtain permission before use.