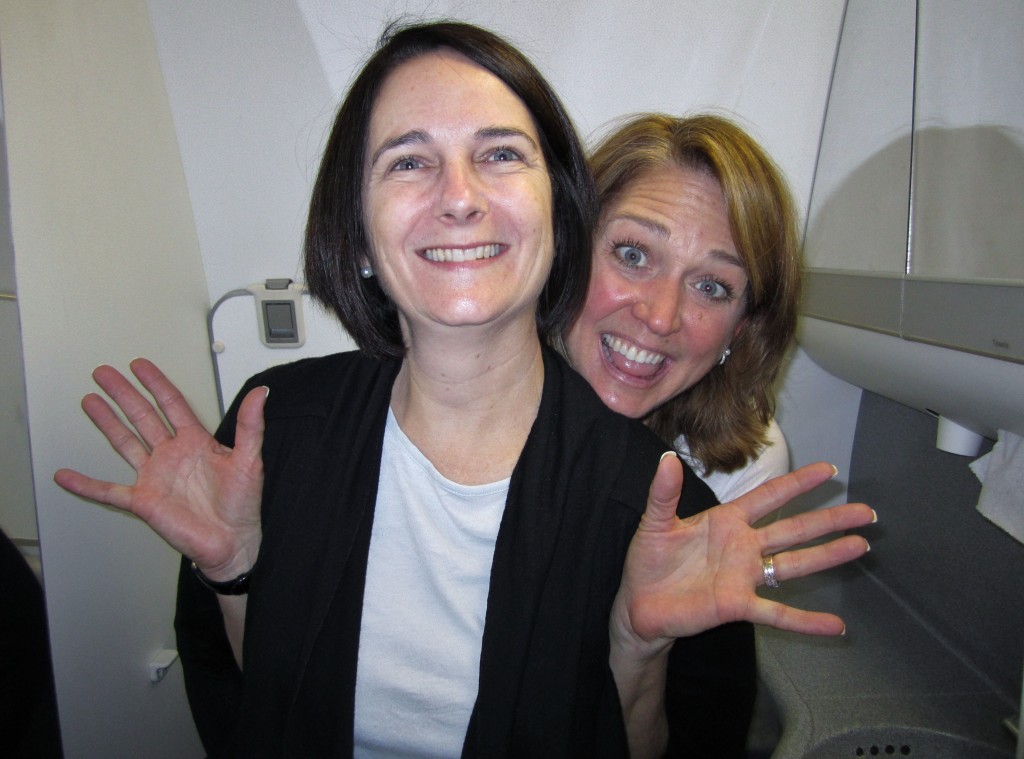 Arriving in Paris refreshed and ready to take on the public transport?  Maybe Yes, Maybe No!

We thought we were ready, after all we have prided ourselves on being low maintenance and taking advantage of public transport before, but this time we ran into a couple of hiccups.  The first being that the kiosks selling RER train tickets into Gare de Nord did not accept our U.S. credit cards.  We thought, no problem, we have Euros at the ready but the machines do not accept bills, only coins.  We then stood in a short line and purchased tickets from a smiling English-friendly cashier.  Whew, one hurdle overcome so the hard part is over!  Off we went downstairs to the freezing cold platform; gloves were donned for the five-minute wait.  It was a smooth ride to Gare de Nord where we were serenaded by a Frenchmen playing the accordion (no eye contact was made else we would have had a hard time shaking him), but that’s where the transition was made from easy breezy travel to nightmare on Elm Street.

I have a bum shoulder which needs surgery that I have been putting off until after spring break so I can travel to the British Virgin Islands with my family without a sling on.  So, part of my nightmare is due to the fact that carrying anything in my left hand is out of the question.   Anyhoo…Elizabeth and I sped to Line 4 of the Métro headed towards our stop at Odéon rolling our suitcases and dodging commuters with their briefcases and café cups in their hands who were moving quickly in the opposite direction from us in the tunnels.  We were like fish swimming upstream but with smiles on our faces because we were in Paris!  To get to our Métro line we took “UP” escalators and “Down” escalators which were thankfully all working well.  The train car opened up but not many travelers got out so we had to squeeze our luggage aboard being careful to not roll over anyone’s toes in the process.  We were a bit separated in the car but able to make eye contact to share a smile at the fact we were only 20 minutes from dropping off the bags and heading out shopping the January sales in the city of lights.

Gal Pal Christine later on in the week

Here’s where things get really ugly…

Changing lines in the Métro is easy if you don’t have luggage and love to work out but challenging when you have a few bags and a painful burning shoulder.  Stairs up to cross over to the next line and stairs back down to get to the other side killed the impending shopping buzz.  We were lucky that we made it just in the nick of time for the next train to our final destination.  Yeah!  We are now five minutes from coffee and shopping – woo hoo!  Whoops, another major buzz kill as when we arrived at Odéon we faced miles of uphill stairs with our luggage in tow.  By the time Elizabeth and I saw sunlight at the top of the tunnel and smelled fresh air, we were sweating from our forced weight lifting.  No buzz – only a stinging shoulder and alot of huffing and puffing from a couple of middle-age ladies whose lungs feel like they had smoked a pack of cigarettes before breakfast.  We pondered for a brief moment how the handicapped or the elderly could survive this torture when out of the corner of my eye I spied an elderly couple heading up the stairs.  A frail woman was in front and the even more frail looking man was behind her holding her at the hips and pushing her up each hurdle while laughing…perspective is everything!

We’re here!  We’re happy!   We’re headed for caffeine and people watching and the nightmare commute is but a blip on a radar screen in the adventures of the Gal Pals, however we’re taking a taxi back to Charles de Gaulle for sure!

… and Corey, washed down with a glass of red wine!!!

Odeon stop – like being back home for me!! Read the quote on the statue! If you want a coffee or snack go to Cafe Latin on Rue St Andre des Arts and introduce yourself to the very charming owner Yann (say “yarn”), and say I introduced you!!

Hi John,
Too bad I am already back in the US! I would have loved to have coffee at Yann’s place! What does the quote say? Missed out on that too!
Cheers,
Priscilla

The statue is located on the Place de l’Odeon – a gathering point for everyone heading to the movies nearby! The statue is of Dante, who was one of the leaders of the French Revolution and his house was on this spot. The quote basically says (sorry I don’t have the exact words) “After bread, the most important thing is education”. It is appropriate that around here are many university buildings, especially for medecine (in this area).

Whew! Glad you made it okay. How the heck were you “refreshed” when you arrived in Paris? Are you one of those lucky souls who can sleep on airplanes? I have a bum shoulder too, and once I saw what all the stairs were like in the Metro, I was very glad I took an airport shuttle into Paris from Charles de Gaulle. (I also did not have a carry-on size suitcase, but a larger one. I would have died trying to make it through the Metro with my suitcase!) It is definitely an adventure.

Hi Gray!
Used miles to upgrade to first class so had a sweet seat on the way over. Our Continental flight attendant Sharon kept us happily fed, wined and happy which left us with a refreshed feeling upon arrival. It was our lucky travel day!
We took a van back to CDG wisely with all our luggage and I have learned my lesson with the transfer from CDG to the Metro to NOT ever do it again with my bum shoulder. If I am lucky then next year my arm will just be getting to the point when I can carry my purse post surgery so won’t be foolishly taking any chances lugging luggage around. Obviously the origins of the word luggage should have dawned on me earlier! LOL!
Cheers,
Priscilla

Hysterical! So glad this is all behind you. I’m heading to Paris tomorrow, and I do take a cab into the city when I have my luggage. Then happy to use the metro once I’ve lightened the load. Full disclaimer: I am traveling on business and I do expense the cab ride, which is pricey. But you could split it ;-), although you wouldn’t have this fabulous material for your post….c’est la vie!

Laurie,
Love the business travel perks! Take them when you can get them. No Metro for you = no bad back and lots of fun!
Enjoy!
Priscilla