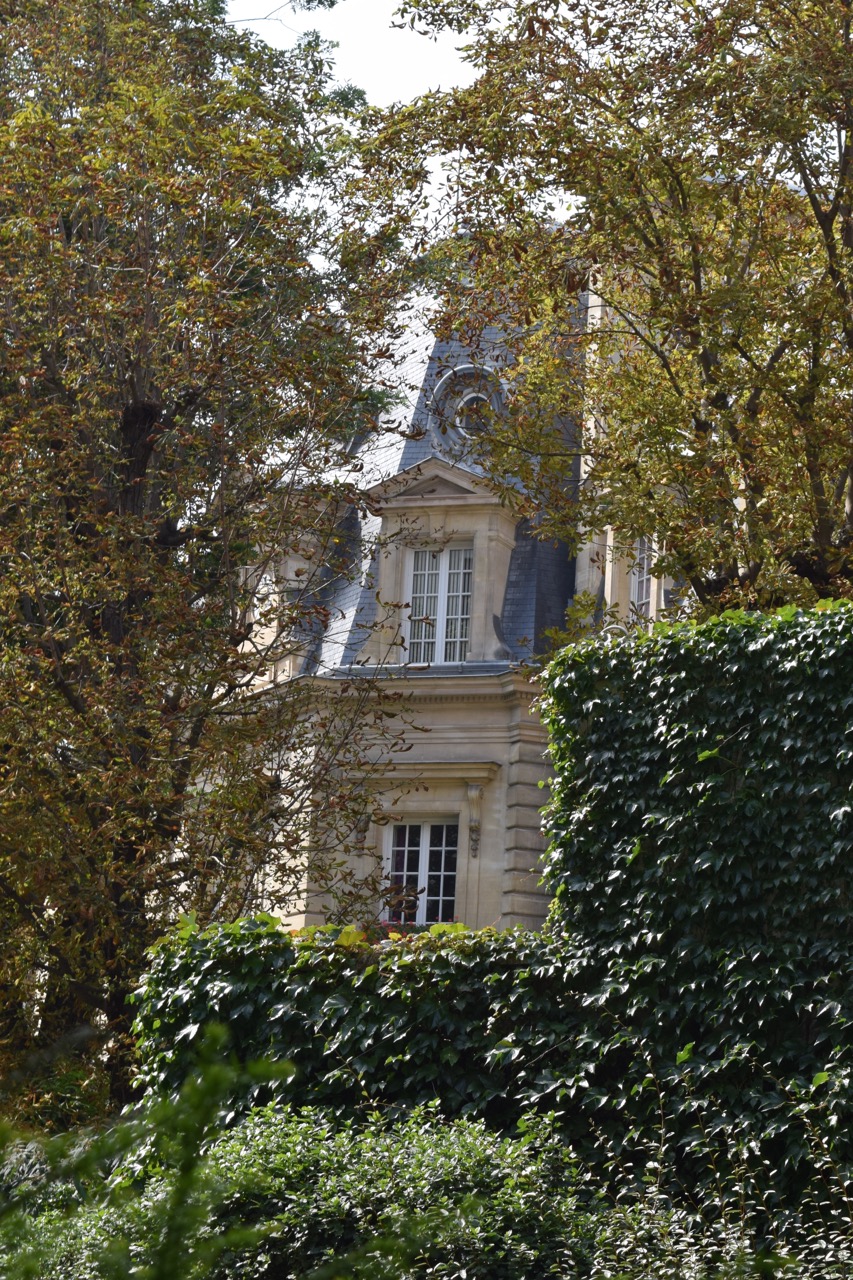 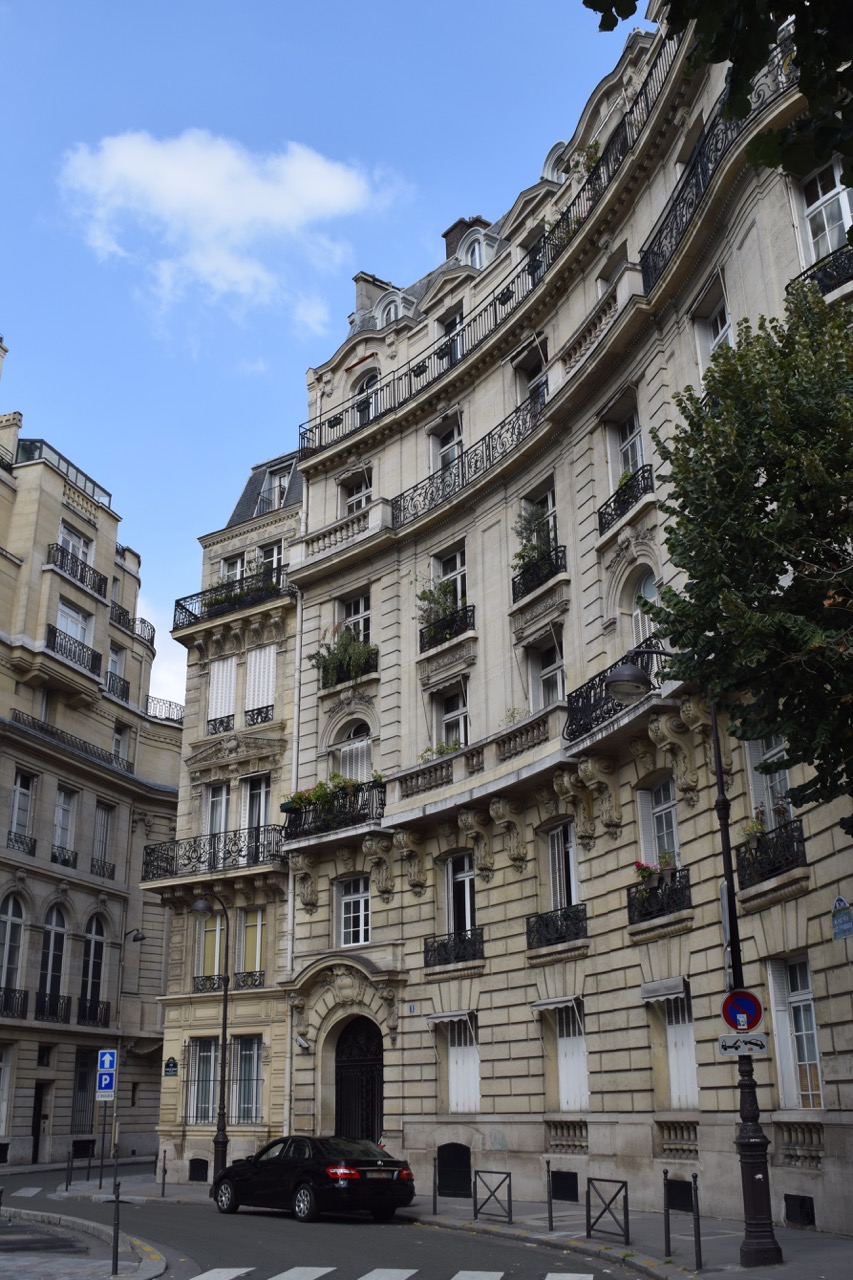 What makes a Paris walk to remember?  Often I walk solo around Paris snapping photos of everyday life of locals. I’ve grown fond of my jaunts and consider each arrondissement interesting. I adore self-guided tours. All you need is a local map and off you go. Look up landmarks as you encounter them to learn about the monuments and architecture around you.

Just around the corner from Hotel Saint James, lies a vibrant city area devoid, for the most part, of tourists. While staying here, I took a stroll along Avenue Victor Hugo in the Paris 16th arrondissement. The 16th is not as sexy as the Right Bank, or as glitzy as the Place de la Madeleine, nor as trendy as the Marais, but it is definitely a cool neighborhood to hang out and be a global local amongst its wealthy inhabitants.

Residents lucky enough to afford the staggeringly high rents enjoy the wide streets, proximity to nature (Park Bois de Boulogne). I felt a bit guilty invading the local’s space, but not enough to keep me away. I spent an afternoon wandering around the orderly side streets off Avenues Bugeaud and Hugo that were not as interesting as the pre-Haussmann Marais venues where homes and businesses were built to their owners wishes and not a set of orderly plans. Still, coming from the U.S. the curved mansion blocks were gorgeous to me with the detailed carvings and provided a sense of serenity in a crowded city.

Here were my favorite things to experience and photograph: 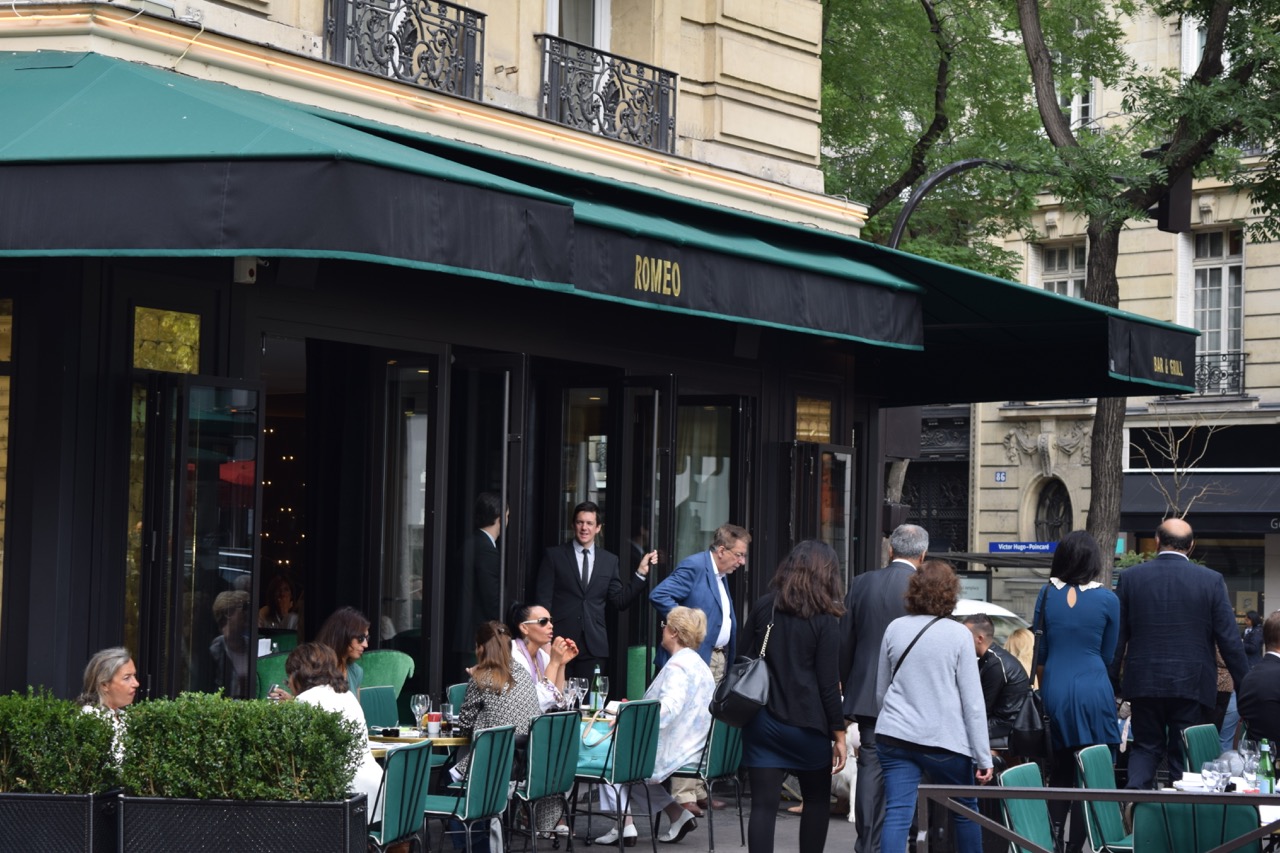 Romeo Italian restaurant where large brick oven pizzas are served piping hot and the bread divine. The outdoor terrace was bustling at every hour of the day and inside was certainly hopping too at night. The prices were cheap, but the atmosphere was not! 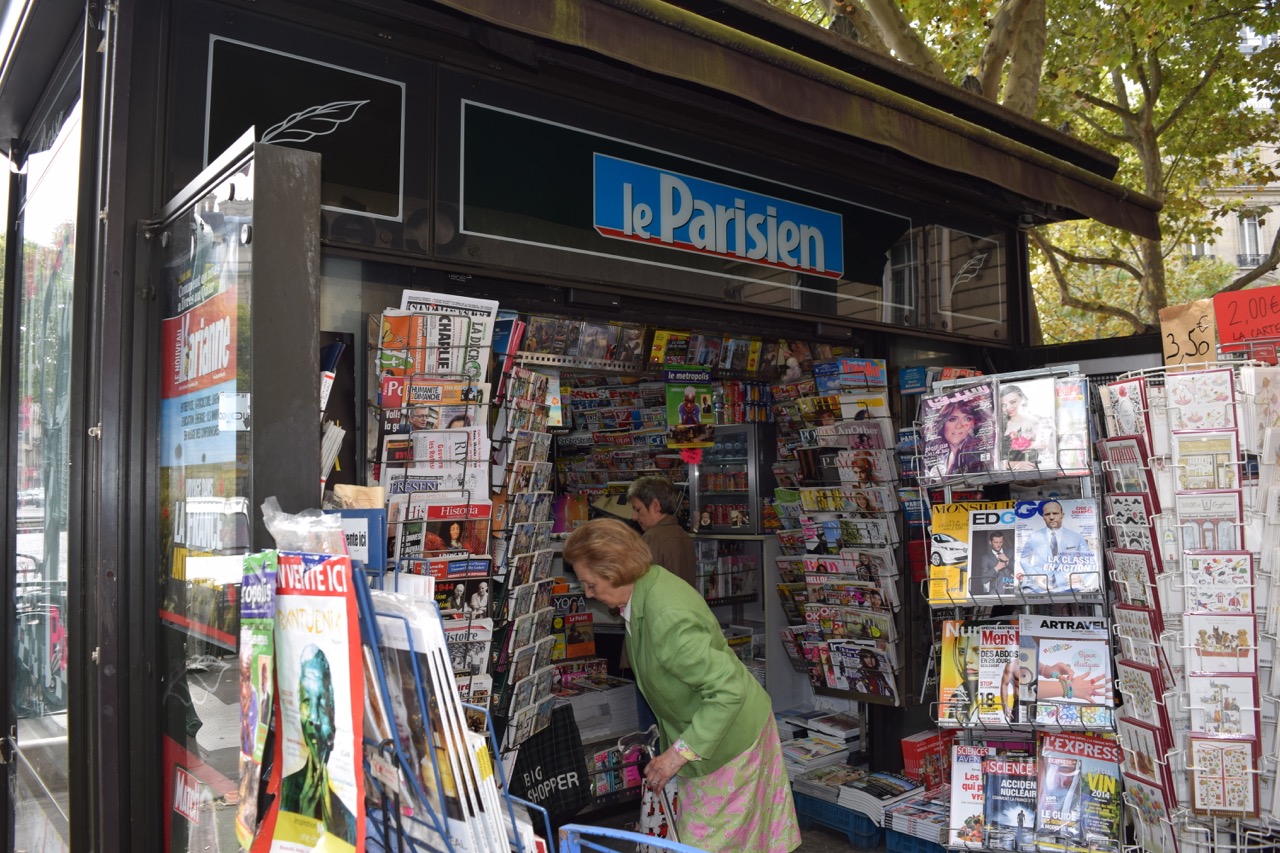 The newsstand was not extraordinary, but was more substantial than the ones in the tourist areas. It makes sense when you think about it. This is a neighborhood where people occupy most of the buildings, not businesses, thus there are more customers and a sophisticated, well-traveled bunch that demand papers from all over the world.

Crests and crowns are everywhere if you look for them. I am sure if I lived here I would stop noticing them, but as a tourist it made my heart sing to see such artwork and throwbacks to prominent families. 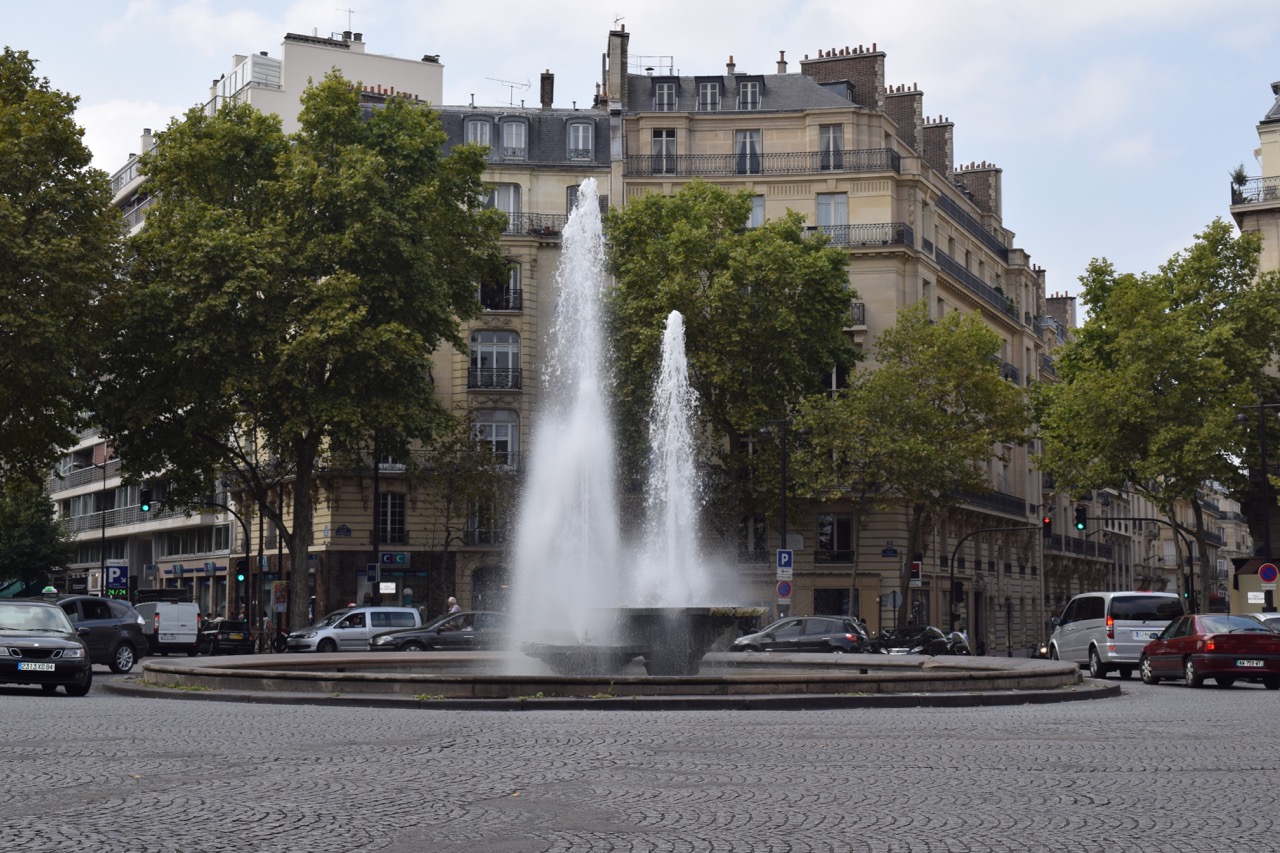 Every important junction needs a fountain so the rotary where eight large streets feed into the roundabout is a perfect spot to place a water feature. This one is less ornate than most, but it does the trick on a hot day to make you feel a little bit cooler. 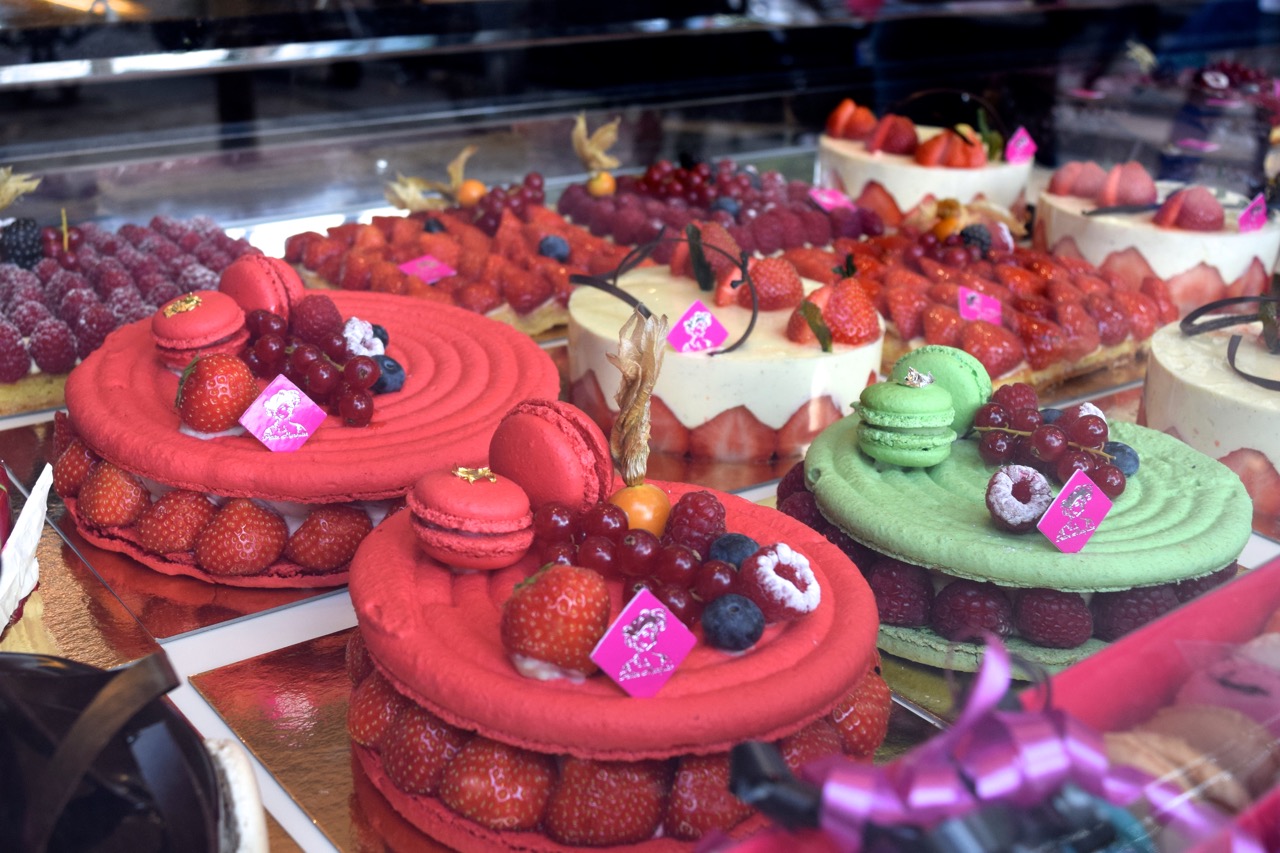 The A la Petite Marquise boulangerie where the pastries in the window were the most vivid colored sweets I have ever seen. I can only imagine trying to get a stain from the frosting of these cakes out of a white linen outfit. I still think it would be worth it! 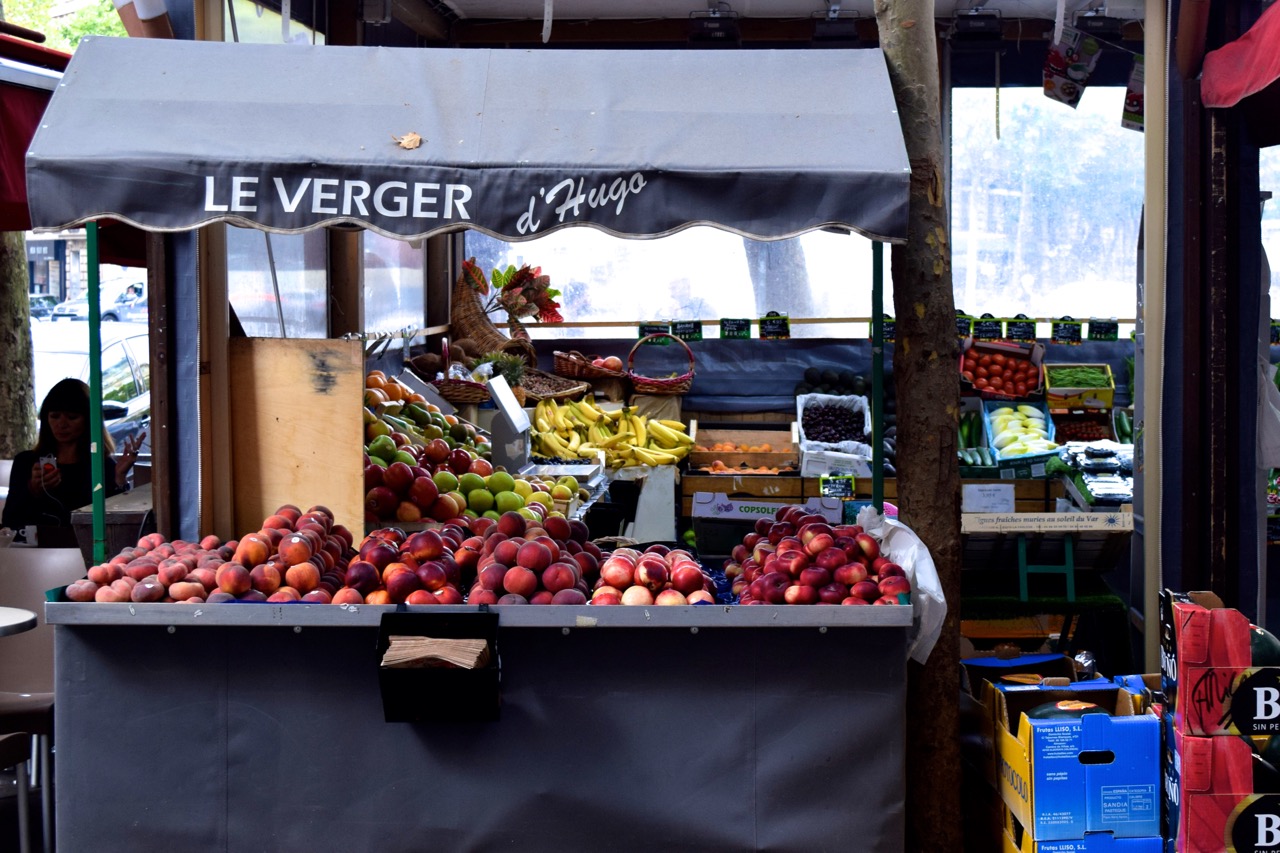 Le Verger on the circle is a handy fruit and veggie stand that I found to be filled with organic options and exotic treats that I could smell before I even spotted the awning. 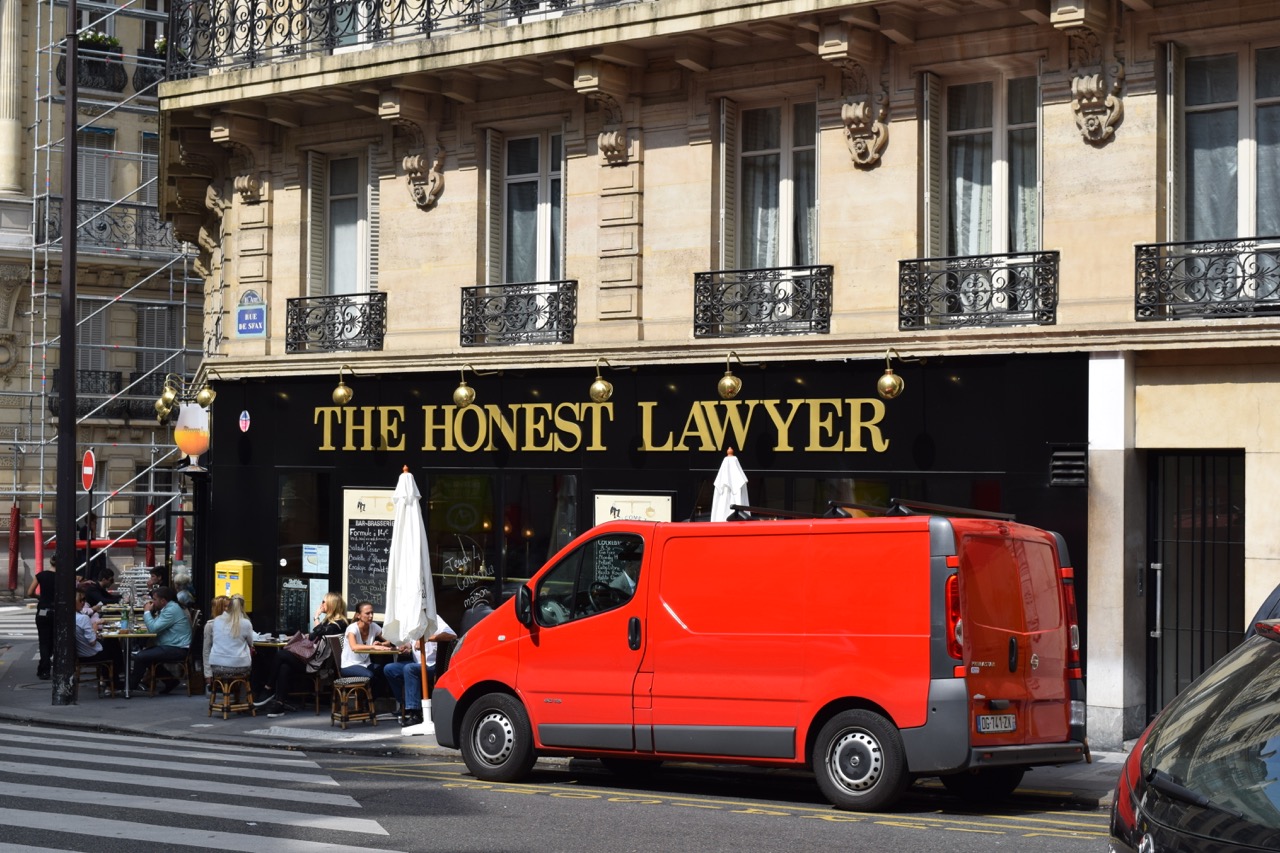 How funny to have a pub named the Honest Lawyer – such an oxymoron. I loved that it was packed in the middle of the day by men and women in suits indoors and by regular folks outside, clearly the lawyer types preferred anonymity the afternoon I was there. It just made me smile.

Next time you are in Paris, take a walk along Avenue Victor Hugo in the 16th and enjoy the views.

All photographs are the property of The Weekend In Paris. Must obtain permission before use.

Sorry to poke fun at the lawyers when there are so many good ones! I love that you have a good sense of humor and took it the right way!

I visited Paris when I was 9 yrs old and then again when I was a student at 18.
Neither visit worked out too well

Thanks for sharing the Real Paris, it´s obvious I need to revisit!

Yes! You need to visit Paris again and see it through new lenses. Sometimes it is overwhelming or you just plain run into the wrong people that can make a trip seem horrible. If you read my favorite places to visit and tours you will definitely see that Paris can be manageable and very satisfying. Don’t hesitate to contact me with any questions about my favorite city on earth to visit!

I think these types of neighbourhoods are the best. You’re off the tourist track, yet there is plenty to amuse travellers. The Honest Lawyer is hilarious!

I laughed so hard at the Honest Lawyer, but have struck a nerve with some of my Paris fans who are lawyers. Most have a great sense of humor and appreciated it as you and I did.

Thanks so much,
Priscilla

Love these ideas and I think I’d visit just so I could buy something at the boulangerie.

So funny! I am obsessed with chocolate eclairs in Paris. My friends swear that’s the only reason I go there.

Thanks for reading and taking the time to comment!

Will definitely check out this area when I eventually make it to Paris. Looks truly charming.

Thanks for taking the time to write in. I hope you make it to Paris soon! It’s worth the wait, but don’t wait too long!

This is exactly my kind of thing, spending time walking, camera in hand, discovering new places or seeing not so new in a new way.

Of course I love to carry my camera everywhere and it’s so nice to be able to look back and see all the low-key places you never thought you would see.

Photographs are the best memento.

It’s my pleasure to provide people who love Paris or who have never been information to help make their stay fun!

Thank you for taking the time to write in your thoughts.

Guess lawyers are accustomed to the abuse, but it’s a group you might not want to defame so blatantly! Ha! Ha!

LOL Nancy! I am sure most lawyers are used to the ribbing by now. After all, the pub owner had a sense of humor and clearly the lawyers appreciated it! Next time we are in Paris together, let’s go!