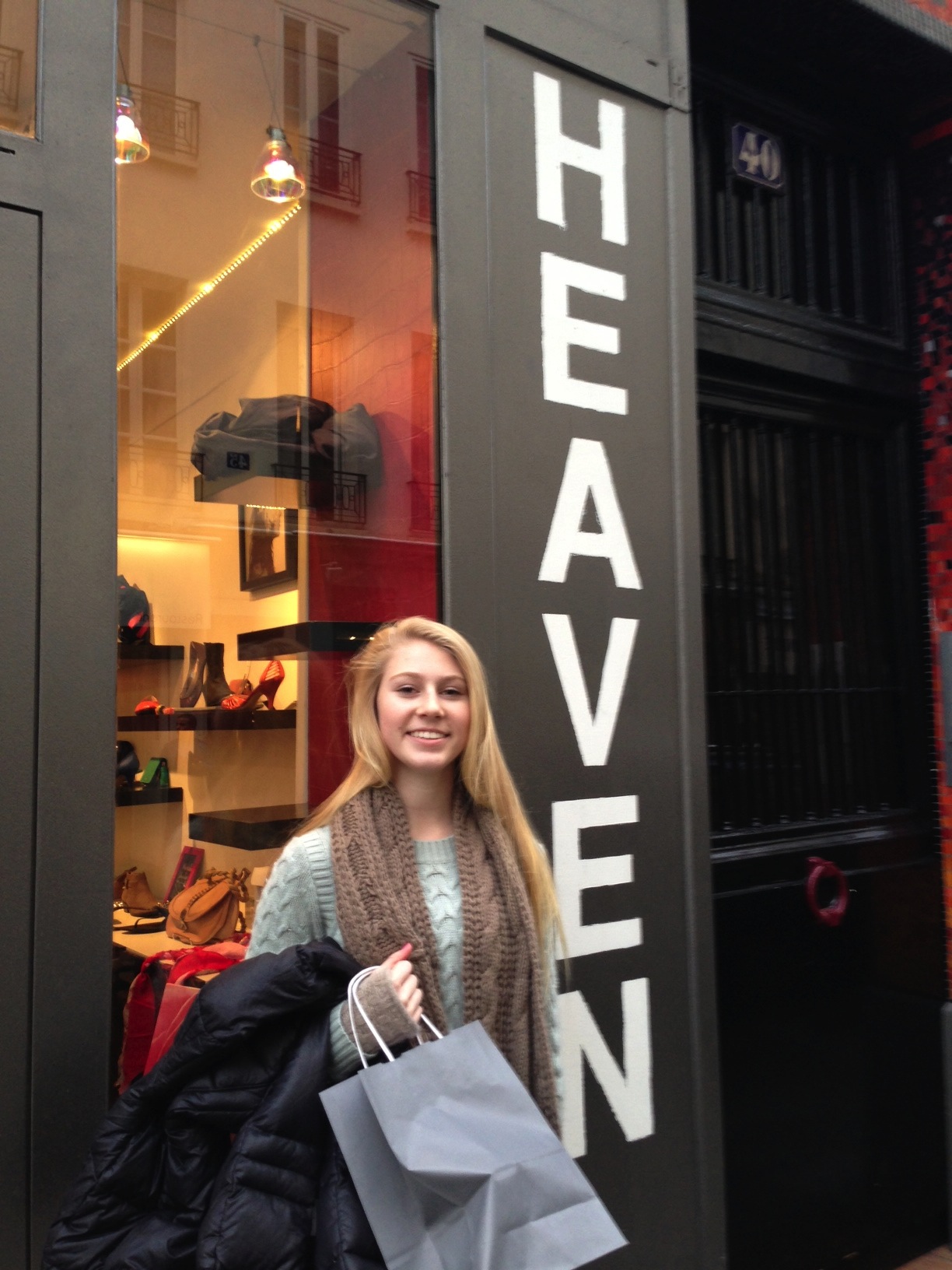 A Trip to Paris With Teenagers, My Interview with a 15-Year-Old World Traveler 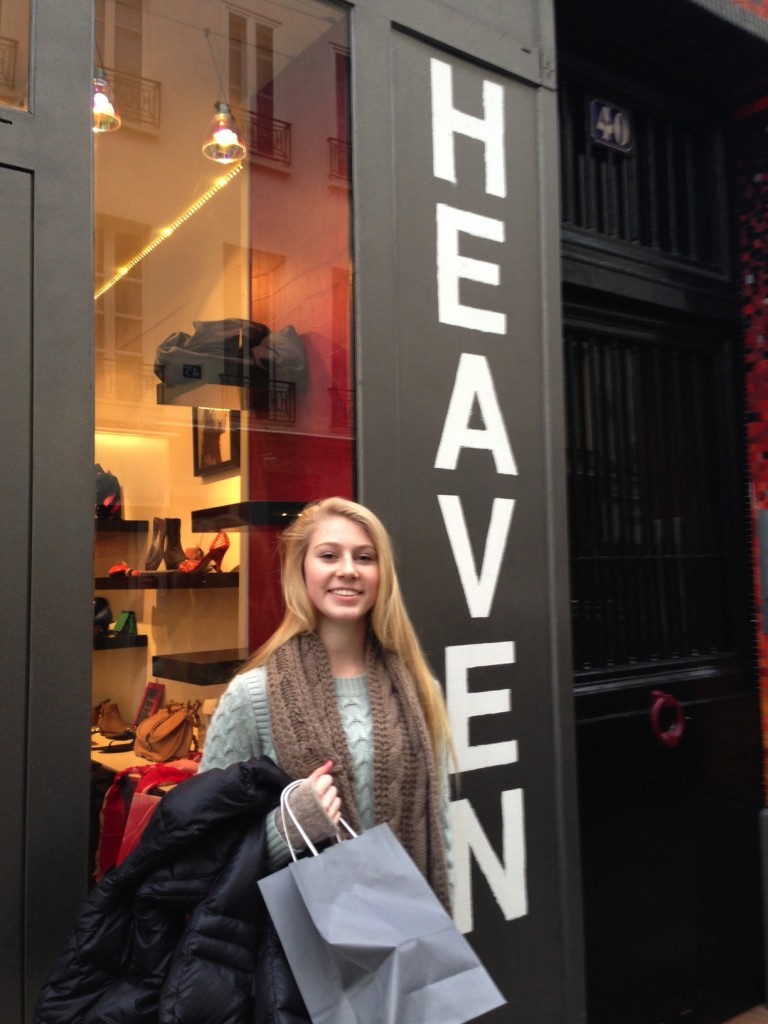 Caroline in “Heaven” in Paris

Paris with teenagers? You bet! Lucky are the teenage daughters or granddaughters whose relatives deem it necessary to take them to Paris for a “girls” vacation. Sometimes the parent or child have too high expectations and are disappointed, but not so in this case. I spoke with Caroline Orr, a hip 15-year-old Texas teenager who recently visited Paris for the first time with her mother and grandmother for the trip of a lifetime. Here are Caroline’s thoughts, musings and observations that you might find helpful when planning a trip with a teenage girl in mind:

The Weekend In Paris: Caroline, what was your very favorite thing about your experience in Paris?

Caroline: Surprisingly, not the shopping! Caroline’s answer was, “…the culture, the food, and definitely the people watching.”

The Weekend In Paris: If there was one thing you would tell your “bestie” to do in Paris, what would it be?

The Weekend In Paris: What surprised you the most? The small hotel rooms, the scale of the monuments, the city traffic? 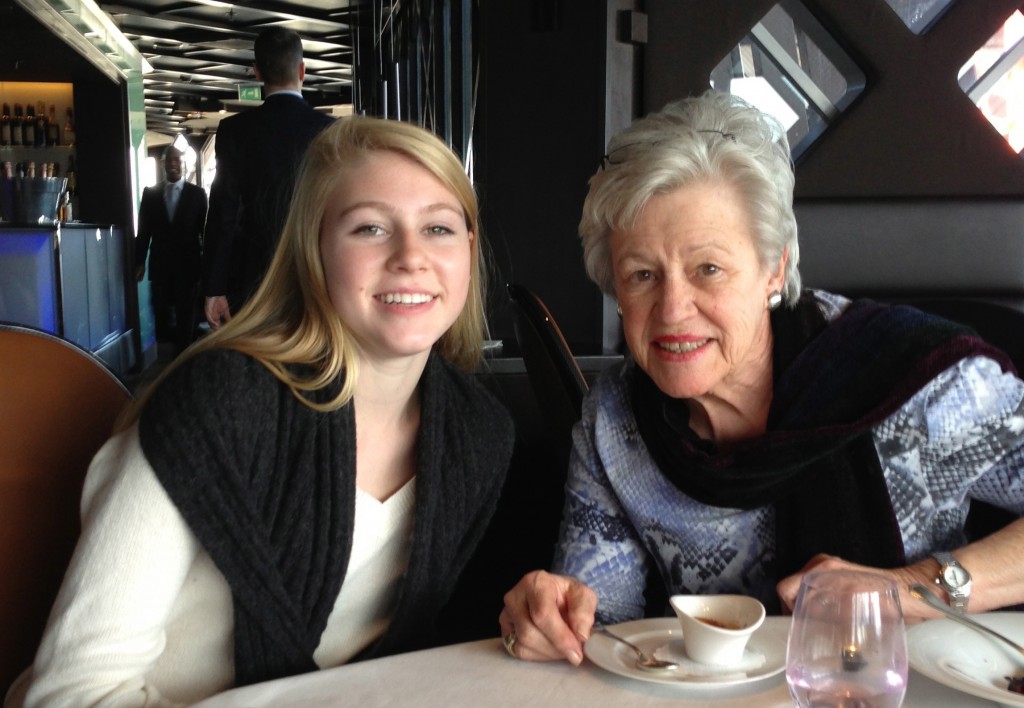 Caroline and her grandmother at Jules Verne

The Weekend In Paris: Tell me about the shopping! What types of clothes attracted you?

Caroline: “Since I didn’t go to Paris with set things in mind, it was always things that were different that I gravitated towards. Accessories were the bigger hit for me. Necklaces were unlike anything I had ever seen! I bought a crocheted vest to wear with jeans and everything and a cutting edge, runway version of a white tee-shirt that had a filmy sheen to it with a cut out back panel and interesting sleeves. I received many compliments from my friends back home so it was my favorite piece.” She went on to tell me, “My favorite things that I bought were a necklace from Secrets de Fille on rue de Buci and a couple of tops from Heaven on rue Dauphin.  My mom bought several items at Bruce Field, including a necklace that looks really expensive and a classic style tote bag in a really trendy blue color.   We did some shopping on the Right Bank, but mostly that area was really expensive.  If you are shopping on the rue St. Honore, check out Collete!  It has the most beautiful clothes that I have ever seen. Since pretty much everything in Collette is outrageously expensive, I thought we were just looking.  However, my mother spied one rack of clothes that was reasonably priced, so was able to get fun casual top there!” – note from Priscilla: Successful shopping Parisian style Caroline! Way to go! 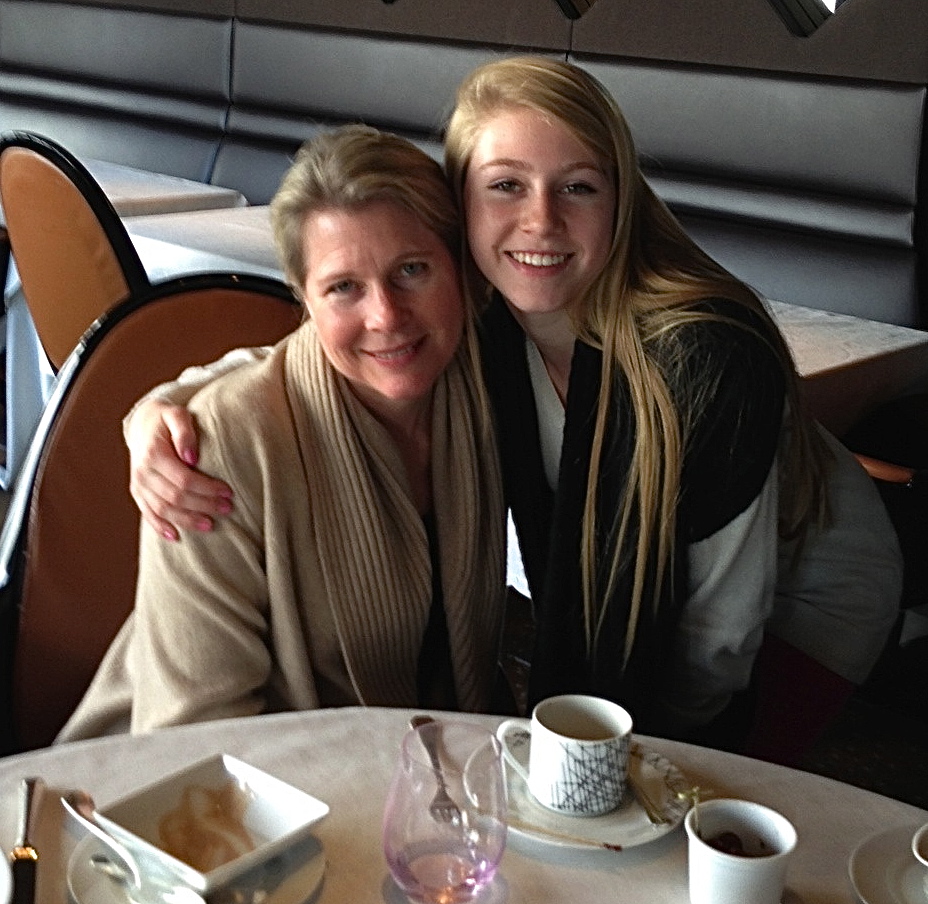 Mother and Daughter having lunch at Jules Verne

The Weekend In Paris: You visited the Louvre and the d’Orsay Museums. Which was your favorite and why?

Caroline: “My favorite was the Louvre because I thought the layout was more interesting and I appreciated the history of it. I like that it had a lot of different art interests in one place. It was so big, you can’t get to everything which can be frustrating.” – note from Priscilla: Everyone says that Caroline so don’t feel badly. I have been going to Paris for over 20 years and have only scratched the surface.

The Weekend In Paris: What did you typically eat for breakfast, lunch and dinner?

Caroline: “It was neat that we ate at The Relais Christine Hotel every morning in a beautiful room, in the basement with vaulted ceilings and stone walls. I normally had a chocolate croissant and fruit and cheese. I had really nice hot chocolate too. We had lunch at some fancy places, but I typically had a salad, and a croque monsieur with mineral water. For dinner my favorite savory dish that I ate was at a haute cuisine restaurant called Le Grand Vefour. It was ravioli stuffed with foie gras, yum!”
The Weekend In Paris: How did you handle the jet lag? Nap or go straight through?
Caroline: “We powered through the whole time. Morning coffee kept me going through the day. We went on a chocolate run if we had a spell of fatigue in the afternoons.”
The Weekend In Paris: Any advice for traveling with mother and grandmother?
Caroline: “Be patient, if grandmother is tired let her leave to go back to the hotel to rest.” Caroline added, “We were on a girl’s trip, doing all girl’s stuff enjoying each other’s company. It was a special time I will remember forever.” 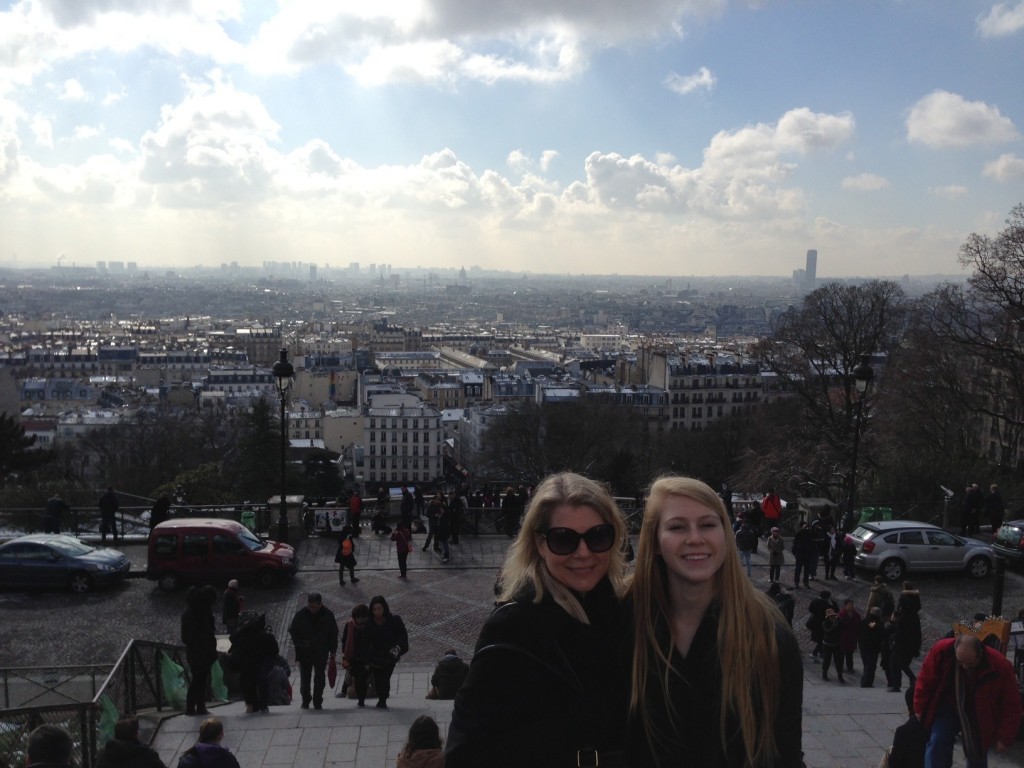 Gail and Caroline taking in the views of Sacre Coeur

The Weekend In Paris: Compare London and Paris for me from your perspective since you visited both on this trip.

Caroline: “Paris is definitely more beautiful, has better architecture, charm. London was more urban and modern feeling. Overall I enjoyed both equally. I would live in London but vacation in Paris because of the language barrier.” – note from Priscilla: Great observations!
The Weekend In Paris: What was your least favorite thing you did in the City of Light?
Caroline: “My least favorite thing was the Bon Marché – my first impression was it was so great, but then the sales ladies were tapping on our shoulders and aggressively trying to get us to buy things.”
The Weekend In Paris: You were there five nights. Was it long enough?
Caroline: “I think one more night would have been better. I wasn’t ready to leave.” – note from Priscilla: I always feel like I need one more night no matter how long I stay!
Thank you to Caroline for the interview and for sharing her photos with us. What a treat to hear directly from such a well-spoken and mature young lady. You definitely have the “stuff” of what future Gal Pals are made of!
Jules VerneShopping in Paris for teenagersTeenagers in Paris
4 comments 0 FacebookTwitterPinterestEmail
previous post

Photos of the Eiffel Tower Never Get Old

Love reading these very insightful comments from Caroline! Would love to take my daughter on this same trip! Such a great helpful article!

Caroline, what a great trip! Paris is one of my favorite cities! How wonderful for you to enjoy it with your mom and grand mom!

Didn’t Caroline do a great job with the interview? She is an amazing young woman who did Paris justice with her view of Paris for teenagers.

Caroline, you got it 100% right! Had my first trip to Paris last summer, and couldn’t get enough of the Louvre, scare Coeur and the restaurants. Favorite restaurant was one that only served mussels, cooked so many different ways. A feast on all levels! Can’t wait to go back.