Posted at 08:18h in Fashion, France, Shopping by Weekend In Paris 0 Comments 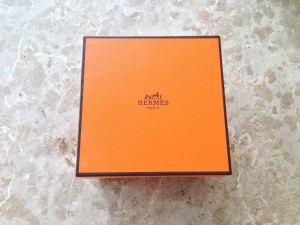 There are luxury brands and then there is Hermès. Not many people pronounce Hermès correctly, never mind know what the brand is all about or why they command such high prices for their luxury goods, but they sure do recognize the signature orange box as holding something truly special inside. Hermès (pronounced Air-MES(z), – S sound is a combo of s and z) is a family company based in Paris since 1828. The family was originally from Germany – shocking I know. They built a reputation for producing high quality leather goods for use on riding carriages, thus the logo, and expanded from there. 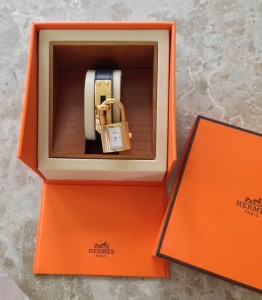 Today Hermès is still located at their original spot at 24 rue du Faubourg Saint-Honoré 75008 although the manufacturing of the items has moved outside of Paris for more space. Despite the expansion around the globe to nearly every continent, they have maintained their dedication to perfection in the world of luxury items. They have refused to build manufacturing plants with assembly lines or compromise on the quality of the raw materials used to make their products. Did you know that each ‘Kelly bag’ is made by one person only? It takes them 18-24 hours to finish one purse – which is why you will not find any stores with a shelf of bags waiting to be sold. Locally made by artisans, nearly 100% of what goes into making an Hermès product is produced in France.

I consider a stop in the original Hermès a ‘must do’ on your first trip to Paris, but after that, I suggest you check out the location 42, avenue George V just steps away from the gorgeous Four Seasons George V. If you are out and about perusing the small boutiques in the 6th there is another Hermès located at 17, rue de Sèvres very close to the famous Café de Flore where you can sit down for a great cup of coffee or glass of Bordeaux and people-watch – it’s the best!