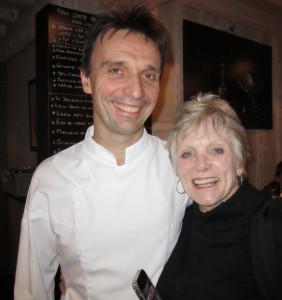 Sharon with Chef François from L’Epi Dupin. I took her there to celebrate her being a fantastic flight attendant in 2012.

I’ve written before about my favorite flight attendant Sharon Conrad who flies for United (formerly Continental) and who I think epitomizes what is so enjoyable about international travel. She is friendly, efficient and professional. She is fun and always goes out of her way to please her passengers. Sharon happened to be my flight attendant for many trips back and forth to Paris for many years until her home base and schedule changed after the merger happened. Memories of her excellent service were wiped out on my latest plane trip.

The direct flights from Houston to Paris were interrupted this year forcing us to fly to Paris via another city. The easiest flight was through Chicago which meant that we had to be up earlier, get our chores out-of-the-way before the trip – writing notes for loved ones back home reminding them about the schedules, paying last-minute bills, scrambling to make sure we packed our power cords and batteries left out overnight. We skipped meals preparing and looked forward to sitting down in our comfortable business class seats (used miles to upgrade thank goodness) for a nice meal and glass of champagne. Hunger overcame us and as soon as the appetizer of a sliver of smoked salmon with lettuce was put in front of us, we gobbled it down along with a piece of bread awaiting our entrees while watching a movie. 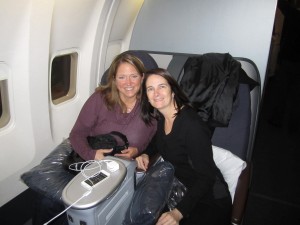 Elizabeth and moi before the flight attendant from HELL began hassling us.

The flight attendant, the anti-Sharon, came over to me and gestured for me to remove my headset as he had something to say. I did so and looked up at him anticipating he would be asking me if I wanted something to drink, but instead this came out of his mouth, “Boy you were hungry. I can’t believe you ate all that.” Taken off guard by the nature of the comment I replied, “Well, we didn’t have anything to eat. This is our first meal.” Elizabeth, the other Gal Pal traveling with me, was blissfully still watching her movie oblivious to this line of discussion until this point when he then said something to the effect of, “Americans are so fat. I am always amazed at how much they eat. I only eat one meal a day and the appetizer would be sufficient for me.” We were gob-smacked! “Did he just say that?” we said to each other.

Thankfully a different flight attendant brought our entrees and we were spared feeling guilty for eating our whole steaks, potatoes and veggies followed by the dessert cart. Elizabeth ordered a hot fudge sundae in protest, but I was unable to enjoy such a pleasure and settled for a small piece of chocolate. We went to sleep to be sure we were ready for the next morning’s arrival in Paris and were hoping our last dealing with him was over. Not so fast! I woke up earlier than Elizabeth and read for a bit, then began to watch a film in French to get my ear tuned for the trip when my buddy (not) came back and gestured the same motion for me to remove my headset. This time I took them off and gave him the “look” that said, “I’m in the middle of something so hurry up.” His important words he needed to speak to me right then and there were, “Do your kids ever tell you, you watch too much t.v.?” Seriously?!!! He made an assumption that I had children (which I do – two great kids in fact) and he was making an inappropriate remark about my plane activities. This really pissed me off! I ignored him and put my headset back on. Hint, hint… 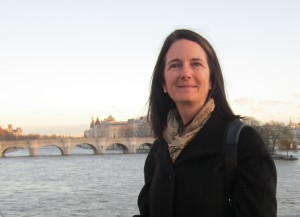 I definitely didn’t let the anti-Sharon steal my mojo! I had a fab time in Paris.

When it was time to depart the plane we were the first row off, but he stopped me just short of the gangway and started asking me questions like, “What is your favorite museum in Paris? Where are you going?” I said very curtly, “I am headed to the Pompidou” and he replied, “I have a good friend I am staying with. He’s a lawyer and his place is right near the museum. I can’t wait to go see it.” I really could give a you know what, and moved to leave again, but his hand was on my shoulder. I moved his hand and deplaned as quickly as humanly possible. Understandably, my fellow passengers behind were annoyed that he was holding up the line to chat.

He was either working out some sort of aggression against mommy travelers or is severely socially awkward. I have no idea, but he is in need of some sensitivity training at best. Didn’t anyone ever tell him not to comment on how much a lady eats or what a passenger wants to choose as their activity while being trapped in a small space? United can’t be responsible for every rogue flight attendant in the fleet any more than I am responsible for my fellow passenger’s rude behaviors, but there needs to be some sort of mechanism to catch these losers. I have often filled out post flight survey’s they email me, to praise United staff who are doing a great job, but wonder what, if anything, is ever done when they receive information about incidents like these.

Lesson learned…keep the headphones on and wave Au Revoir to the crazies; praise those great flight attendants who work hard each and every day that make up for this jerk.

A Stroll Past the Passy Market