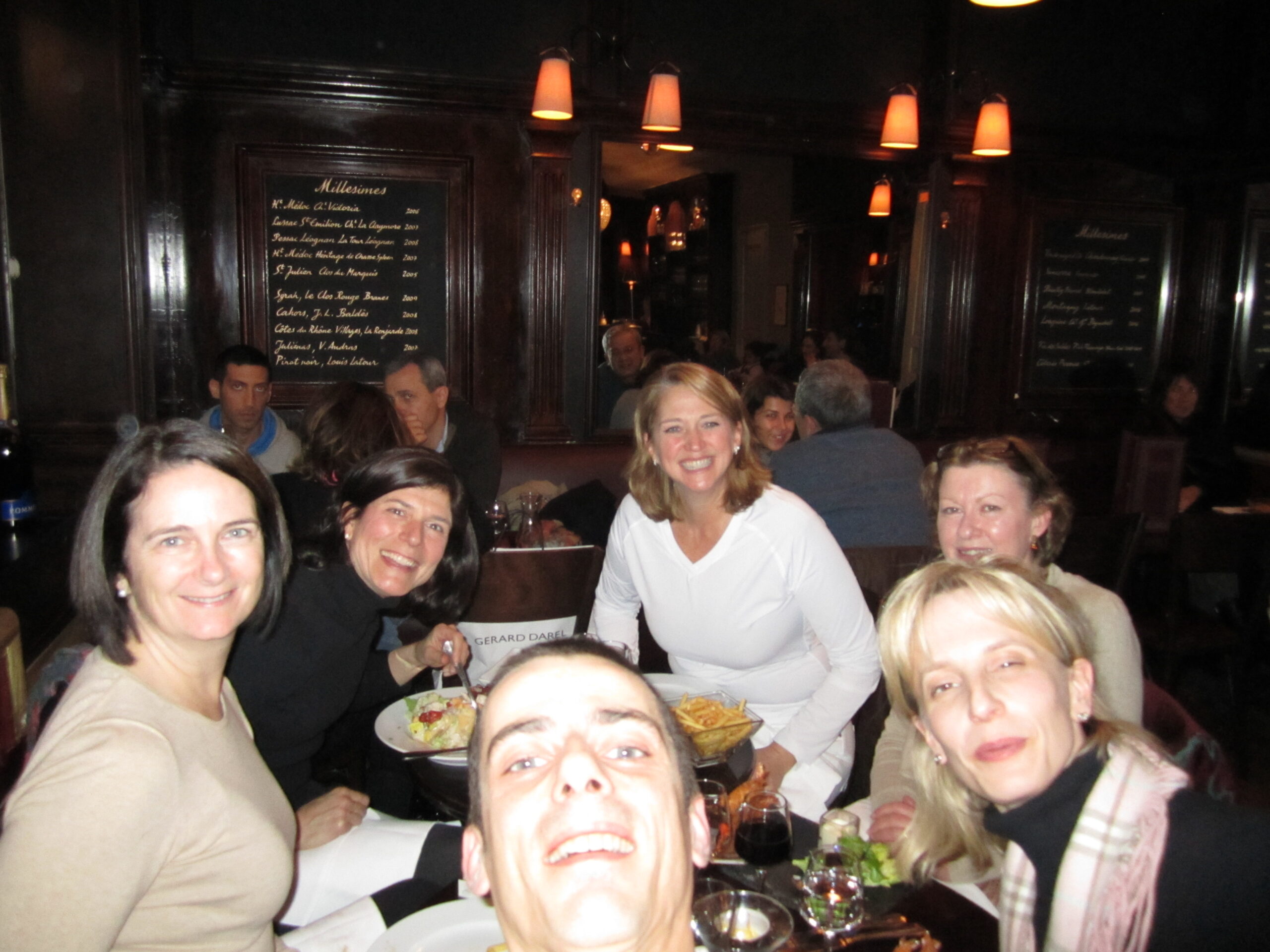 Last month I announced via Twitter that I was going to break one of my hard and fast Gal Pal Rules, but I didn’t say which one.  Twitter pal, @EarPopperNurse (I know – her name makes me gag a bit, but she’s so sweet) took a guess and then has followed up with me inquiring about the answer. 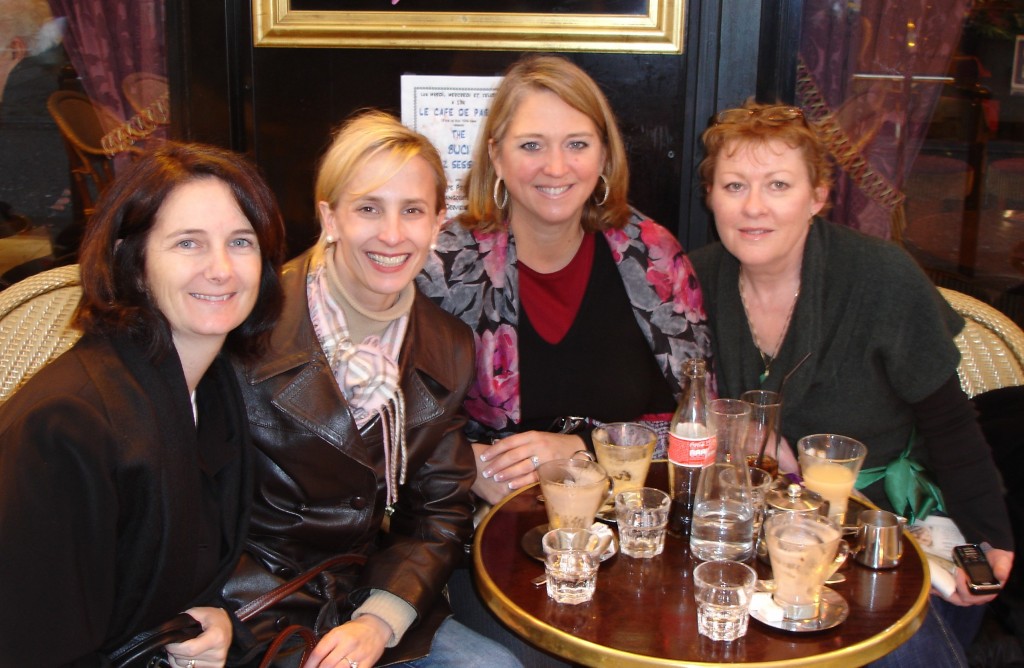 Rule #1 will be broken with the addition of Gal Pal Andrea.  Weekend In Paris followers will know, Lisa’s attendance is mandatory so she’s in.  Elizabeth and Christine have lifetime membership so anytime they can make the trip they are in and since this is my gig, I am in.  If you counted correctly, that makes five headed to Paris for laughs, shopping, eating and drinking wine.

What’s the problem with five?  If you’ve been to Paris you will instantly recognize that restaurant reservations are more difficult, sitting at outdoor Cafés is more challenging and hotel logistics can be tricky. 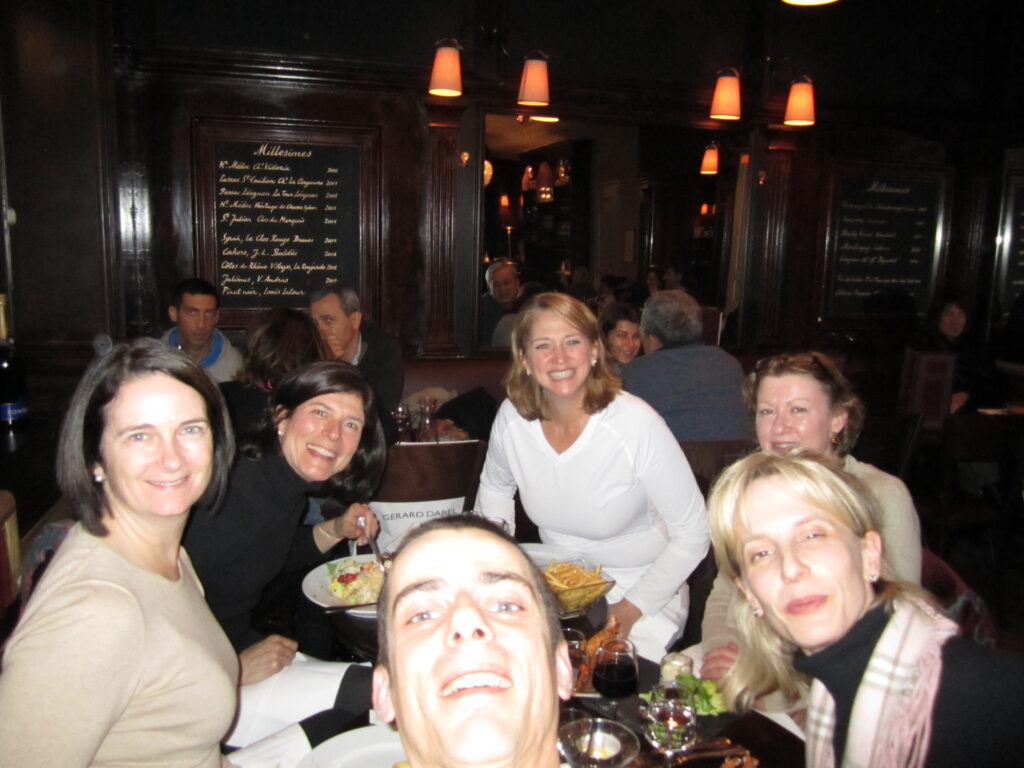 All five enjoying dinner out, and our funny waiter joined in the frivolity

How did I make the decision to break the rule?  Well, let’s just say that when you have someone who has always dreamed of going to Paris it’s a slam dunk for me to want to show them my favorite places and sights.  As I have said before, the trip stays fresh if I have a wide-eyed tourist along for the ride.  Before committing to Andrea that I was going to break the rule for her, I contacted the other Gal Pals traveling with me for approval.  If anyone had reservations or even a hint of one I was prepared to keep the rule intact.  Fortunately for Andrea, Gal Pal Rule #4 and the flexibility of the gals prevailed!

Full disclosure – Andrea is my sister-in-law, but for the intents and purposes of this trip she is my friend.  This was fully discussed before committing to take on a fifth person for the trip.  No family drama or discussion about kids will take place.  We’re just a couple of Gal Pals having a blast in the city of lights – burning the candles at both ends together!  Welcome Andrea – wheels up in two short months!

Rules were made to be broken, right?

Rules were Made to be Broken!

Best and Worst Flight Attendants I’ve Ever Had...