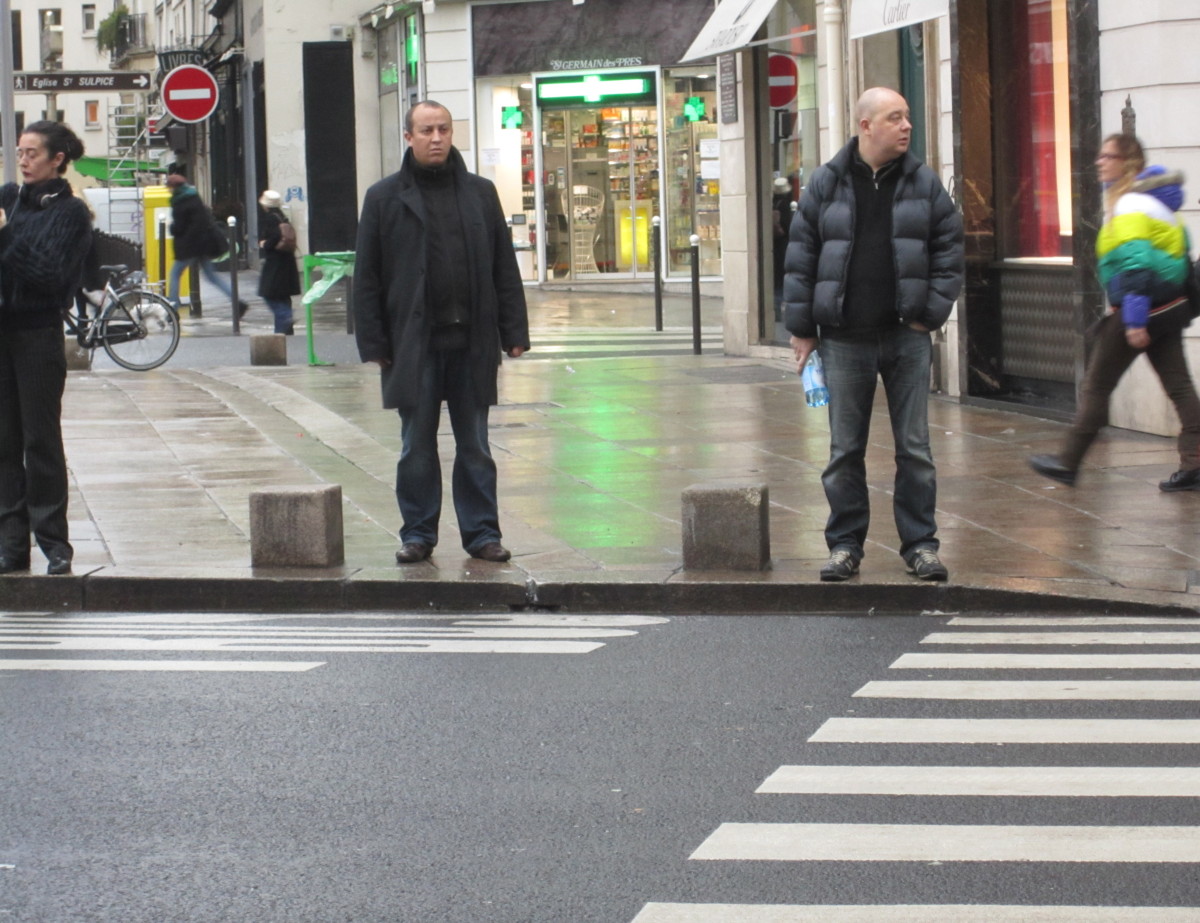 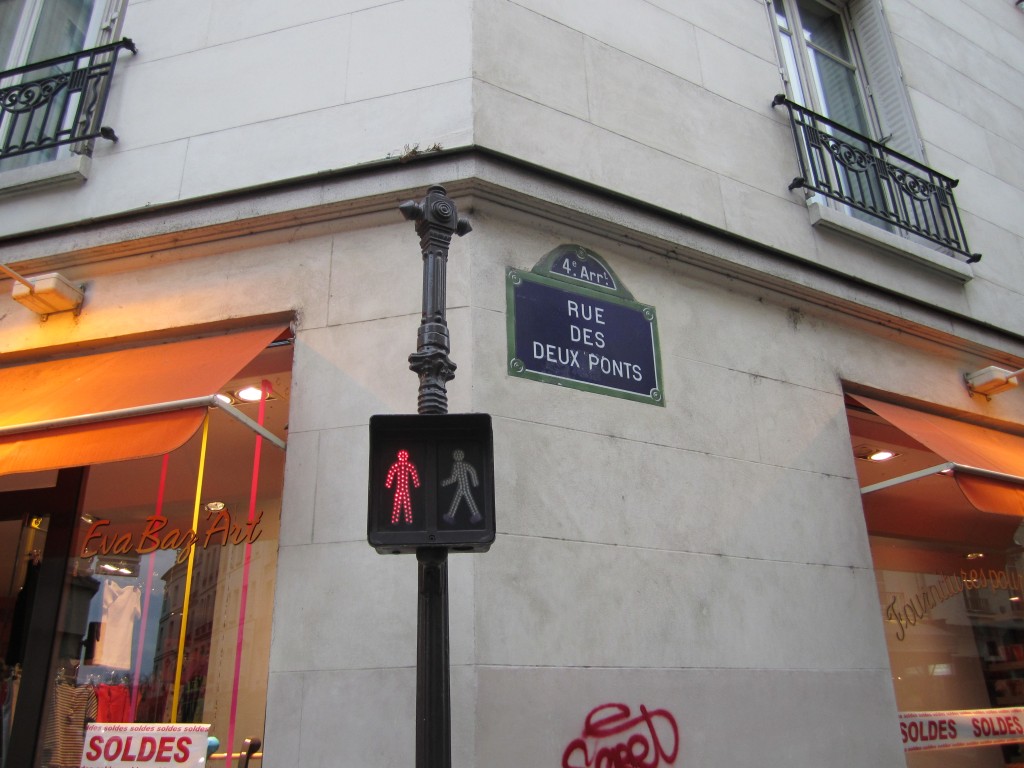 There are rules of thumb for pedestrians on the streets of Paris that French kids are coached about early and adopt as best practices by the age of three. Most tourists need several days and a few near misses to catch on to these unwritten rules.

First and foremost, it is a sport – crossing the streets in Paris. Pedestrians are the home team and motorized vehicles are the visiting team. The home team wants to get from home to the goal (shopping, dining, and perhaps work) with speed, but the visiting team’s objective is much more aggressive. They want to crush the homers on their own territory and beat them back onto the sidewalk, making them yield to their lead-footed whims. They smell fear a block away and by the time they get close enough to see a homer’s “deer in the headlights” look, they know victory is just around the corner, for the home team is already retreating and crying foul. Victory visiting team 1-0! With that in mind, here are a few tips to survive as a tourist walking the streets of Paris.

Watch for motorbikes in the street, or on the sidewalks barreling towards you at alarming speeds with little to no regard for your health or well-being. You must move out of their way and quickly. If you look touristy (i.e. wearing sneakers and a fanny pack) they will consider you a pawn in their game of street chess and mow you down quicker than you can say Check Mate.

Wait for the “green man” to flash at the zebra crossing traffic light posts indicating it is safe (actually a 50/50 proposition) to cross, unless of course you want to look stupid standing there as the locals run across at will. Warning: If you are standing next to French people who do not cross when the green man is flashing, do not cross the street. That is a dead giveaway they can see what you can’t – that there is some crazy cab driver about to bank a turn right into your path.

In times of heavy traffic, wait for the green man, but for sure when the green man flashes, go ahead and walk in front of the that car stuck in the middle of the intersection. It’s the only time pedestrians have the upper hand when it comes to Parisian traffic. Show your superiority, but be quick about it because all bets are off once the “red man” shows up! 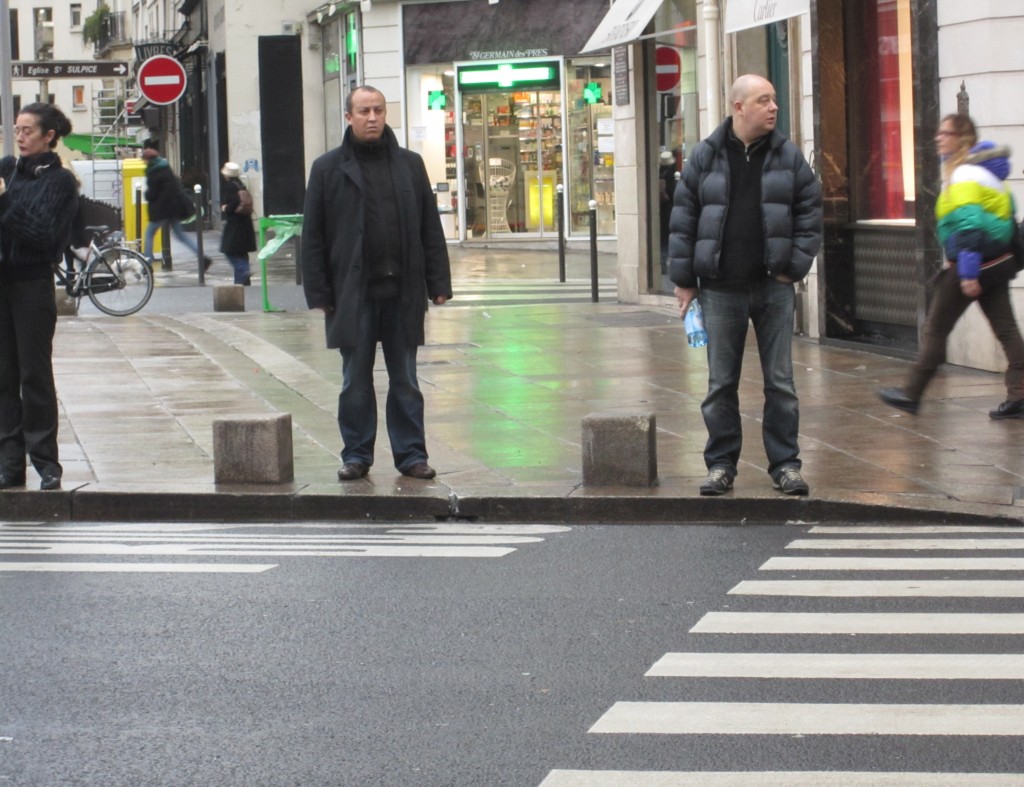 Mind the 15” solid block of unassuming gray concrete that sits stoically on the side of busy Parisian intersections. I believe they are there to deter cars from parking on the sidewalks, but I have not independently confirmed this theory. I have, however, experienced first hand that when said streets are full of people and one is paying more attention to the Tiffany jewelry shop on the other side of the street than the chunk of concrete, that it is quite easy to fall over it. In my case, I was in front of the slab when a car hugging the curb was dangerously close to running over my new suede boots. I attempted to step backwards to avoid the impending doom but instead tripped over the damn thing sending me to the hard, cold ground with my rolling luggage falling on top of me. The absolute first thing that came to my mind was a line from the original Home Alone movie where Macaulay Culkin’s cousin says to him, “Kevin, you are what the French call les incompetent.” It was terribly embarrassing, even more so because those around me ignored it and acted like I was just another bag lady having a usual day tripping all over Paris after one too many vin rouges.

Good luck and make sure you bring your insurance card with you!

Paul Revere and William Dawes jumped on their hors

Two years ago I was in Paris when Notre Dame caugh

The daffodils 🌼 are blooming in Boston’s Nort

Remembering Notre Dame, as she was (spire intact)