Posted at 12:05h in Activities in Paris, France, Planning Paris Trip by Weekend In Paris 3 Comments

There is nothing more pleasant than being in a park when the weather is balmy. Paris’ Luxembourg Gardens are absolutely enchanting during the summer months when the weather is warm, but not too hot. The obvious attractions are the grounds with the plush foliage and fresh blooming flowers, fountains galore and manicured shrubbery, but there is so much more happening in the gardens that tourists like me sometimes miss. We spend our time seeking out the “treasures” such as the relics and statues, but can miss the best, juicy bits of being in a foreign country – getting to know the culture and observing the locals. 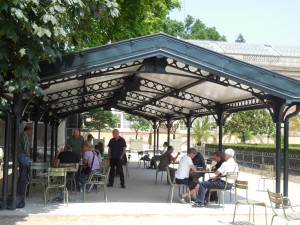 Try sitting on a bench close by, but not too close as to disturb the action and watch as two “master” champion chess players hover over a park table at battle whilst the next player in line waits his turn hoping to gain some insight into how to dethrone the current chess king. Intense drama goes on during these matches and the victory is either celebrated with a rousing cheer or a large groan as the onlookers clearly root for the underdog. Fascinating! 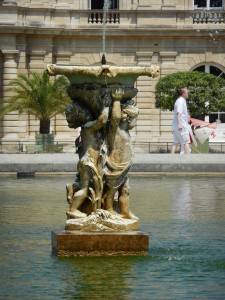 The rather large water fountain plays host to one of the world’s most fun sailing regattas. Petit boys and girls of Paris squeal in delight as they launch the toy sailboats into the water and watch as their boats race one another’s towards the opposite side of the fountain. I could spend hours basking in the sun watching the kids work the boats with great seriousness and earnest effort. There are always a few tears as the mothers and fathers urge their little ones to move on so the next child can have a turn. 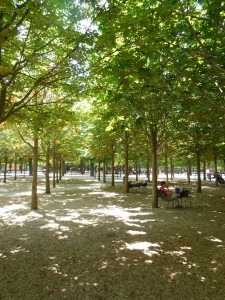 Sit under the shade of one of the thousands of mature trees to picnic while taking in a tennis match. Luxembourg Gardens has a group of public tennis courts that are quite popular. Rolland Garros eat your heart out! Local matches can last as long as any Grand Slam final and the emotions run just as high.