Posted at 14:22h in Activities in Paris, Churches, France, Paris by Weekend In Paris 4 Comments 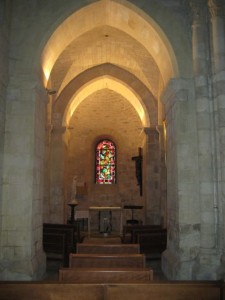 Talk about finding hidden treasures wide open in Paris, my last post about missing a lantern or an alley way pales in comparison to missing an entire church right next to the most visited Basilica in Paris. Saint-Pierre de Montmartre or Saint Peter Church of Montmartre as we call it, sits in the shadows of The Basilica of Sacre Coeur, unassuming and humble. It was on my Context Travel tour of Montmartre that we learned of the significance of this church and its historical value to Catholics worldwide. Peaceful and serene are the words that come to mind when describing the inside of this understated chapel. 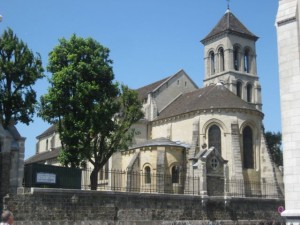 The pillars of the church date back to the times where the Druids of Gaul gathered to worship their gods and the Romans celebrated their affections for Mars and Mercury. St. Peter was built using some of the remains from the ancient worshippers and was completed in the 12th century. St. Denis was credited as being the founder of this church in the 3rd century, however its notoriety comes from the more recent historical writings that suggest Saint Ignatius Loyola took his vows at St. Peter. St. Ignatius Loyola was the founder of the Society of Jesus which to Catholics like me means he was the founder of the Jesuits or “Jebbies” as we call them.

The Jesuits have been responsible for educating children and adults all over the world in schools, colleges, universities and seminaries. They are committed to social justice and ministries in hospitals. Their roots literally stem from the top of Montmartre. Some notable people educated by the Jesuits are:  Descartes, Voltaire, Fidel Castro, Alfred Hitchcock, Bill Clinton, Bing Crosby, Vince Lombardi, Robert Altman, Chris Farley, Salma Hayek, and Denzel Washington.

The Basillica of Sacre Coeur may overshadow St. Peter, but it will not outshine the love of this church for millions of Catholics educated by the Jesuits. I suggest the next time you visit Sacre Coeur, you stop in to see this hidden gem at the top of the hill next to Sacre Coeur.