16 Aug Elvis is Alive and Well and Living in Paris

Posted at 07:18h in Gal Pals, Paris by Weekend In Paris 2 Comments 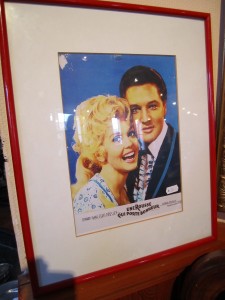 On the 35th Anniversary of Elvis’ death, I am re-posting this post from my 2011 trip. Let’s Rock, everybody let’s rock!

I’ve always been a little sensitive to the Elvis thing.  For starters my parents named my three siblings normal names like Susan, Patty and John while I was stuck with the name Priscilla.  Born in the 60’s and fully aware of the hot Elvis and the fat Elvis married to the infamous babe Priscilla Presley, people always asked me, “How’s Elvis?” and thought it was a hilarious question – like I had never been asked that before.  I remember when my mother announced that Elvis was gone – her first call was to my Aunt Sue who I believe was in mourning for a good month after hearing the news.  Unreal…

Many Elvis fans found it too painful to believe that he was gone and have given in to the conspiracy theory that he ran away to Europe to escape.  I thought that they were nuts until this year.  Elvis is alive and well, living in Paris and driving a taxi.  Yes, he’s driving a fabulous singing cab!

Elvis picked us up at La Tour d’Argent after our amazing meal which I will blog about another day.  We should have known something was up when the door man at the restaurant put us into the cab and told us we were going to have a fun ride.  Two seconds into the trip our cabbie asked if we liked Elvis and put a tune on.  Happily full from our seven course decadent meal we were game to sing along.  Not long after, Elvis put his white bejeweled sunglasses on while the Gal Pals were joining him singing at the top of our lungs.  Then the true confirmation that he is indeed Elvis came at a red traffic light at the corner of Saint Germain Boulevard – Elvis put the taxi in park and we all jumped out dancing and singing in the street to the shocked locals who were queuing up for movie night at the nearby Odéon theaters.  Some pedestrians chimed in and many danced as well.  Only the REAL Elvis could get stuffy Frenchmen to dance and sing in the streets with strange American women shouting from a cab!!!!

We hadn’t quite embarrassed ourselves enough yet so we asked him to swing by the Gal Pal rendezvous place Café de Paris where we had planned to meet the newly arrived Gal Pal Lisa.  Lisa, living in Britain and not terribly big on public scenes was sitting having a glass of Bordeaux (the official wine of the Gal Pals) when to her surprise we pulled up right in front with the windows down banging out our American Idiot version of Jail House Rock.  Needless to say, The Queen Mum as we are now calling her was a bit shocked, but laughed none the less.

I know, I know…you want video as proof – well here it is at last!  Rough and ready…when watching it, look for Lisa who is in the upper right hand corner at a table.  You’ll see her look somewhat annoyed, then she puts on her glasses to see who the heck is yelling in the streets of Paris.  Enjoy folks and until I post some more video, Let’s Rock, Everybody Let’s Rock…