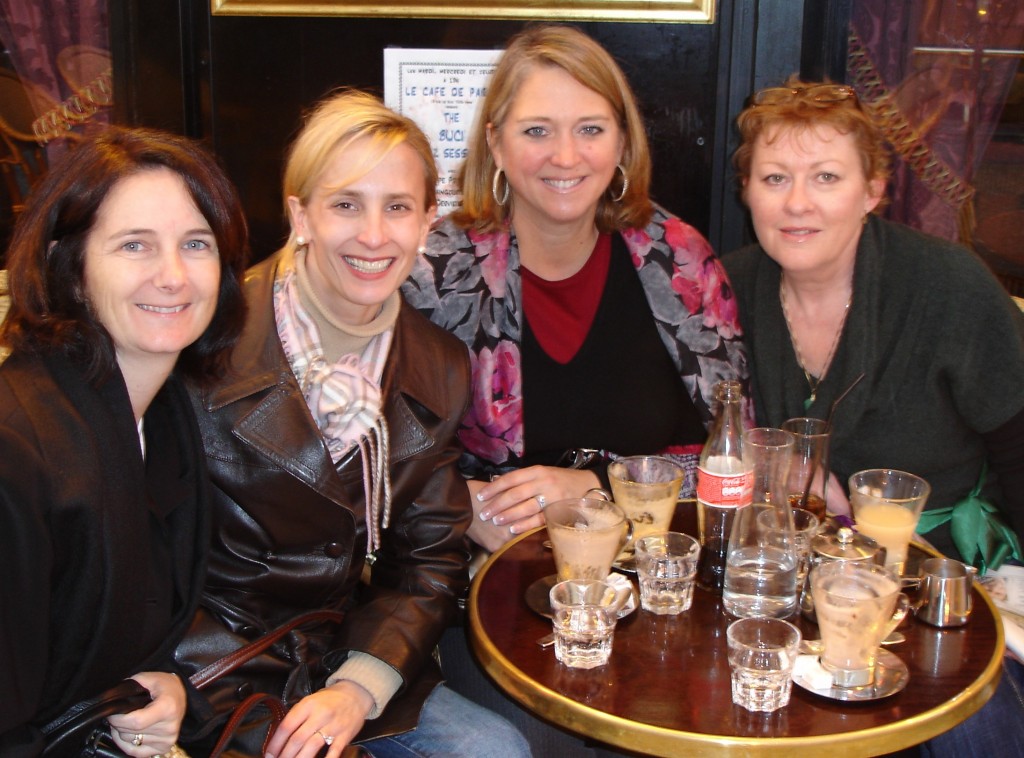 Cafe de Paris is our favorite place for coffee or wine

This photo was taken at a typical Parisian café where we decided to take a break from a long day of sight-seeing and shopping. There are several that we tend to frequent based upon their convenient proximity to the hotel and their friendliness to Americans. I have been to these so many times that I don’t commit all their names to memory, but now that I have a blog I will be sure to document them better for you and provide physical addresses. The one we are sitting at is a Gal Pal favorite called Café de Paris in the 6th Arr. and stays open super late – much later than we should be out! After a certain hour we are by far the oldest patrons and we usually get stuck taking photos of local students with their mates on their cell phones so they can remember what they did the night before. We apparently look like a trustworthy bunch of oldies to them! Perhaps we will have to do the same but for different reasons – “a little touch of the ‘A'” we call it at my house – Alzheimer’s that is.

When we have new additions to the gal pal travelers, we always make sure we take them to the famous Café de Flores or Café Les Deux Magots because they are “must sees” when touring Paris.

Young Sommelier is one of Bordeaux’s Hottest Wine...

Meet the Cistercian Monk Winemakers on Saint-Honorat in...

How much does it cost for a dinner for one, please reply as soon as possble

I just returned from Paris and wanted to throw out a recommendation. Auberge Notre Dame. Here’s my review on Yelp. C’est magnifique!

Hi Jodi,
Welcome to Weekend In Paris. Nice to have a new recommendation!
Thanks for taking the time to read my blog and comment. Please keep reading and letting me know what you think.
Cheers,
Priscilla

To your list of restaurants let me recommend L’Epi Dupin – 11, rue Dupin – 75006 PARIS. It’s right around the corner from Bon Marche and has terrific two and three course lunches which are quite reasonable and innovative without being weird. Plus the busy servers speak English, although they are also patient with those of us who want to speak French but sometimes mangle their language. It’s really crowded so it’s best to book ahead.

Love having another good recommendation and especially since it’s in the gal pal favorite area. Will check it out today on the web and see when we can work it into the schedule!
Fantastic to receive recommendations – keep ’em comin’ my way!
Merci beacoup!