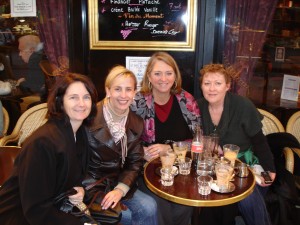 This photo was taken at a typical Parisian café where we decided to take a break from a long day of sight-seeing and shopping. There are several that we tend to frequent based upon their convenient proximity to the hotel and their friendliness to Americans. I have been to these so many times that I don’t commit all their names to memory, but now that I have a blog I will be sure to document them better for you and provide physical addresses. The one we are sitting at is a Gal Pal favorite called Café de Paris in the 6th Arr. and stays open super late – much later than we should be out! After a certain hour we are by far the oldest patrons and we usually get stuck taking photos of local students with their mates on their cell phones so they can remember what they did the night before. We apparently look like a trustworthy bunch of oldies to them! Perhaps we will have to do the same but for different reasons – “a little touch of the ‘A'” we call it at my house – Alzheimer’s that is.

When we have new additions to the gal pal travelers, we always make sure we take them to the famous Café de Flores or Café Les Deux Magots because they are “must sees” when touring Paris. Some cafés are really restaurants now with no outdoor seating such as Le Procope. Le Procope is considered the oldest café in Paris but is more of a busy fine dining establishment. Tourists and locals are equally welcome there so we consider it a “sure thing” for travellers.