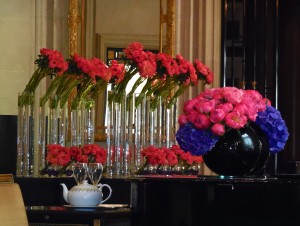 Flowers atop the piano at La Galerie in the George V

When I think of floral arrangements I think of the Mick Jagger of flowers, Rock Star Florist and the King of Freshly Cut Flowers, Jeff Leatham. Jeff has been designing one-of-a-kind creations for the Four Seasons Paris’ George V since 1999. As their florist-in-residence, Jeff has designed floral arrangements for major A-list celebrities, but his best work is on display daily for the hotel guests and visitors to drool over in the lobbies, restaurants and terrace of the hotel. I purposely chose a day to have afternoon tea with my mother-in-law and two sister-in-laws at La Galerie when I knew Jeff was scheduled to perform an installation of his latest shipment of peonies and orchids from Holland in the off-chance I would get to meet my florist idol. 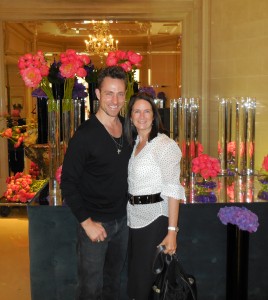 Jeff Leatham, florist in residence at the George V and Priscilla Pilon of The Weekend In Paris

Charismatic, effervescent and hardworking is how I envisioned Jeff when installing his masterpieces. He was all those things in SPADES! I introduced myself to him and told him that not only was I a huge fan of his work, but that my friend Beverly back in Houston was an even bigger fan of his designs. I asked him if I could take his photo and sadly the one of just him was blurred, but luckily I also took one with the two of us that came out much better. He was so patient, even though he was right in the middle of a frenetic paced install. He could have been merely polite, let us snap the photo and be done with us, but as is his reputation for generosity, he went way BEYOND the call of duty. 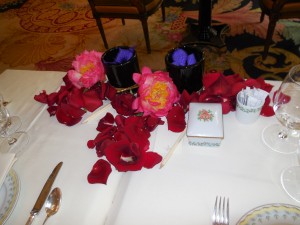 Our tea table adorned with fresh petals from Jeff’s creations

Imagine our surprise when we sat down to our “Celebration Tea” and a special batch of peonies and rose petals were sent over to our table from Jeff. We did as any group of women would do “lunching” at the Four Seasons Paris, we oohed and ahed about our fabulous day thus far while chatting away about each new delicious sweet or savory temptation placed before us, but truly we all kept one eye on Jeff and his team as they transformed the piano top from amazing to the fantastic. The arrangement of peonies was so vibrant with color that the reflection of them on the table beside the piano was mesmerizing. 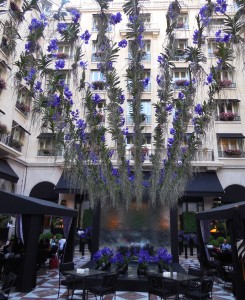 A quick peek outside on the terrace revealed that the incredible vanda orchids hanging on the vines above the shaded patios were in peak condition. Jeff shared with us that they are “misted” heavily for at least an hour a couple of days a week to keep them happy in the hot sun. I agree with music/acting legend Cher who was quoted as saying, “Jeff is not a florist, he is a genius.” 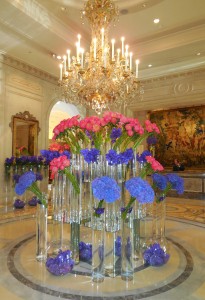 For the armchair traveler who wants to see more of Jeff’s work, you can find his books (Flowers by Jeff Leatham and Flowers by Design) online or at quality book stores near you.