Posted at 11:49h in Fashion, France, Paris, Shopping by Weekend In Paris 1 Comment 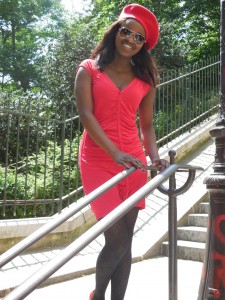 Fall fashion is photographed in the heat of the summer months, making it a challenge for Parisian Models dressed in wool and hats en plein air, but we found one seeming to be up the challenge. Not surprisingly, Paris is one of the most photographed cities in the world. It’s advantage is that is has hundreds of great backdrops for photos shoots. An ugly street in Paris is hard to find!

Chances are, if you saw a pop up tent in the middle of a garden, park, or outside a beautiful building you were witnessing the changing room/holding areas for Parisian Models’ photo shoots. We encountered several such setups during our visit in July. This summer there were a few weeks where the weather was a photographer’s dream and boy was I thrilled we were there for one of them. 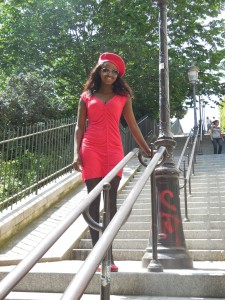 From a different angle on the steps to Sacre Coeur

On the way down the back steps from Sacre Coeur, we happened upon a live shoot and to our amazement the photographer allowed us to snap a couple of quickies of our own. My shots do not do this beautiful gal justice, but I thought you would get a kick from the fact that these days we never see French berets on the street. This model was sporting a lovely red one. I have no idea what publication he was shooting for and perhaps it was just for this gal’s portfolio, but we thought she was super sweet and beautiful.

Days like this one, are one of the reasons I love Paris so much. You never know who you will meet along the way and you get a sneak peek of what’s in Vogue for the coming season!