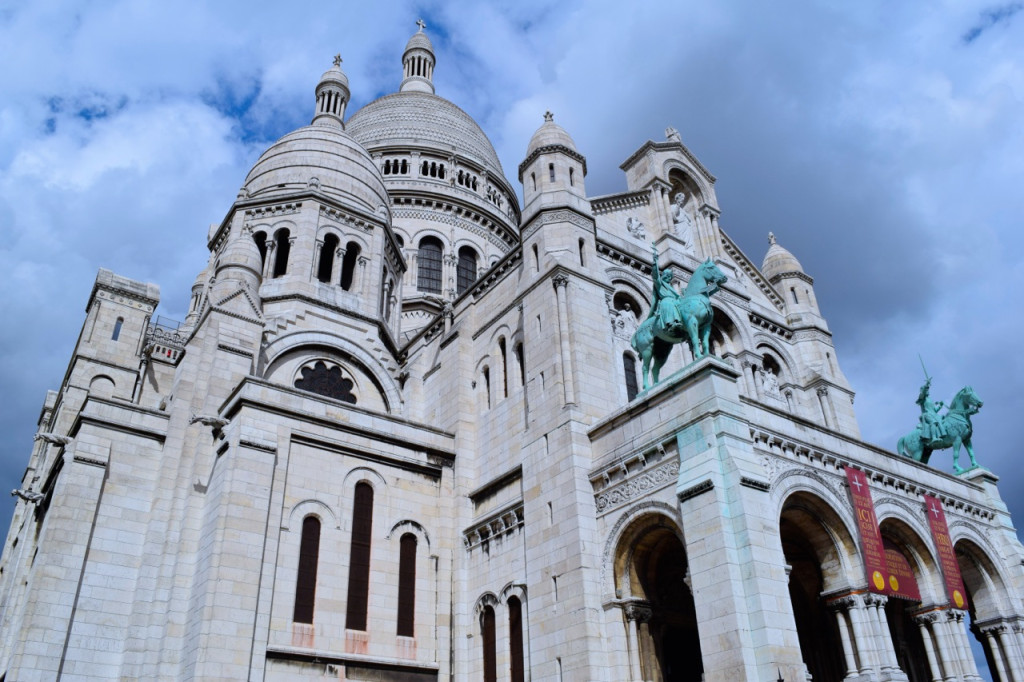 When I began the morning with a fresh cup of ripen strawberries, a warm croissant and a view of hot air balloons in the background, I knew it was going to be a terrific day. Although I hated to leave our outstanding Hotel Saint James Paris for a minute, Sunday in Paris, for me, obliges a visit to church and a mandatory stroll of Montmartre hidden gems. For others in our party, who shall remain nameless, my stroll was more like a forced death march up the stairs, down the hill and back up again. C’est la vie…

These trips are democratic, each person has input into where we go and what we see so before we headed up the hills of Montmartre we began in the Cité. Terry’s choice was a high gothic example of architecture – Sainte-Chapelle. Now part of the Palace of Justice, it once housed the relics of the Passion of Christ. Rome has since reclaimed them and very few people have ever seen them.

The ancient stained glass windows of the upper chapel of Sainte-Chapelle tell the stories of mankind from Genesis, to the Passion, to the Resurrection of Christ. There are a total of 15 stained glass windows with 1,113 scenes depicted and 14 of those that should be read from left to right and from the bottom to the top. 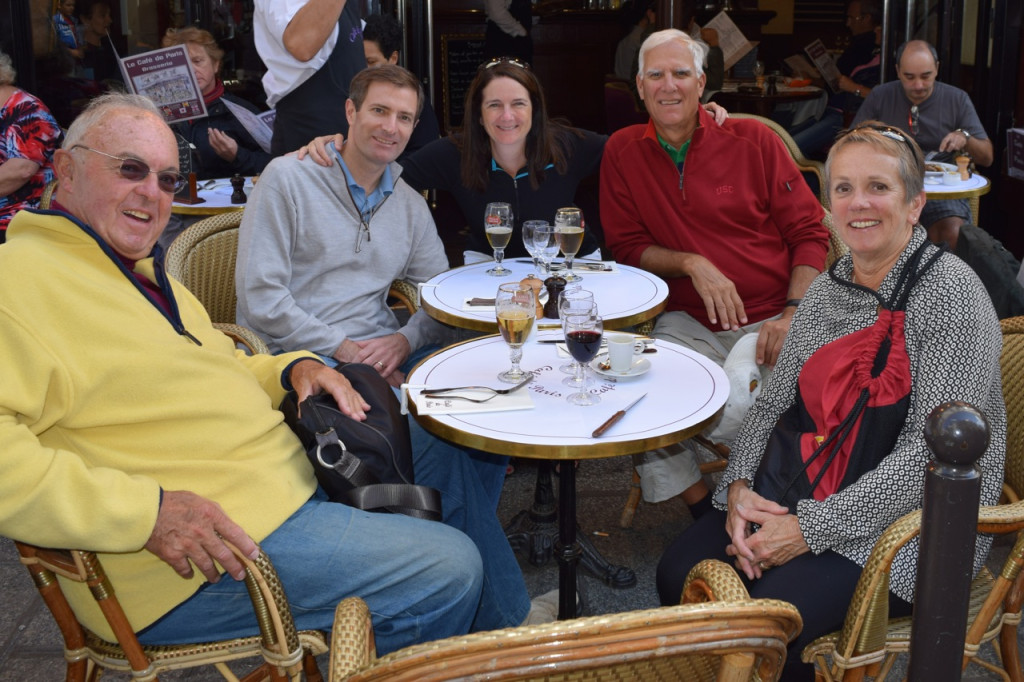 A bit famished we made our way towards Boulevard Saint-Germain via the Seine and rue Buci. We stopped at Gal Pal favorite Café de Paris for some escargot and libations before ending up at Café de Flore to pick up some of their oversized porcelain coffee cups as souvenirs. 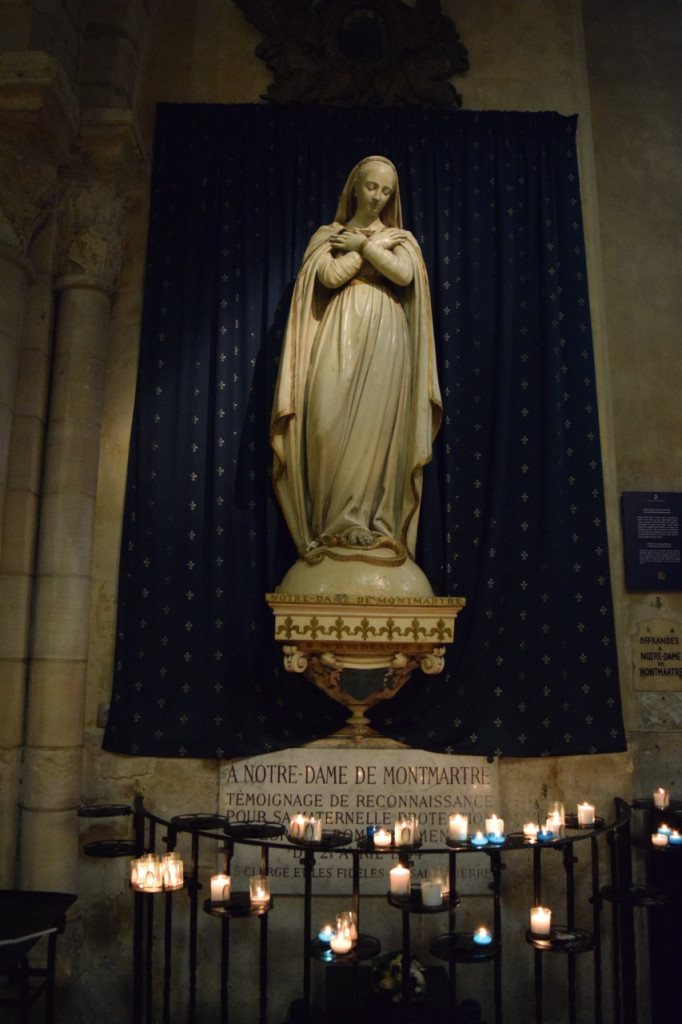 Montmartre bound; it was an easy trip by Métro to arrive at the bottom of the hill. The trek upwards involved quite a few staircases that necessitated a couple of stops to catch our breath, but we made up alive and felt glad that we had exerted some energy after our generous lunch. Saint Peter Church was our first order of business. I have always loved this little gem under the shadow of Sacre Coeur and I wanted to stop here in particular so we could light a candle for Mr. Weekend In Paris’ wonderful, selfless Godmother Christine. 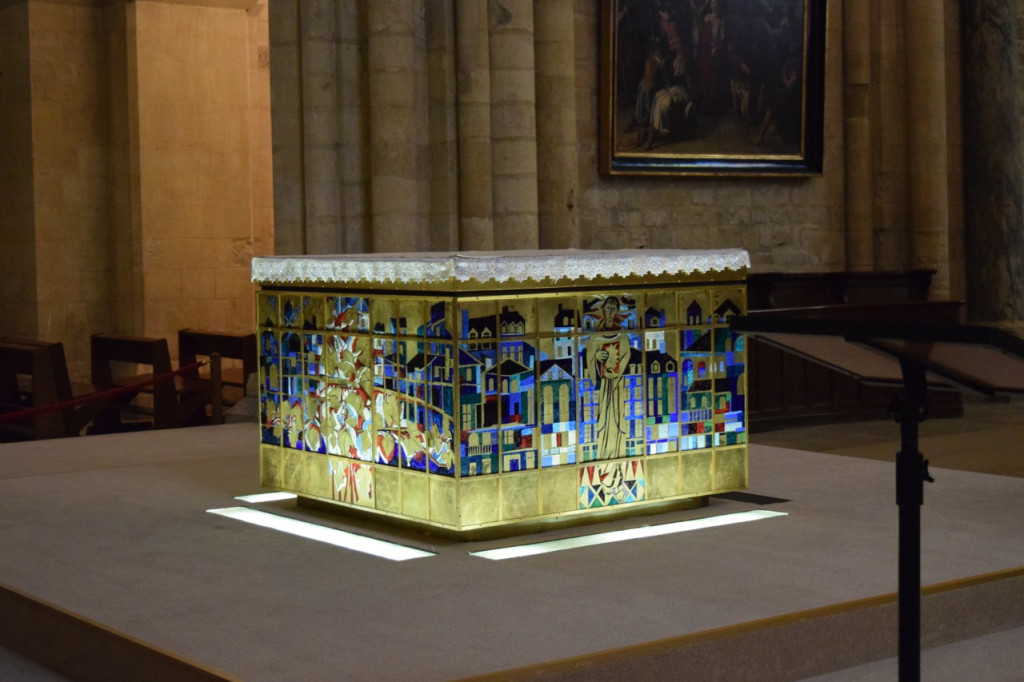 The altar at Saint Peter is made up of a miraculous design of mosaic tiles set into a mortar that appears gold when bathed in light. The modest, yet beautiful design sits quietly in the middle of the humble church. 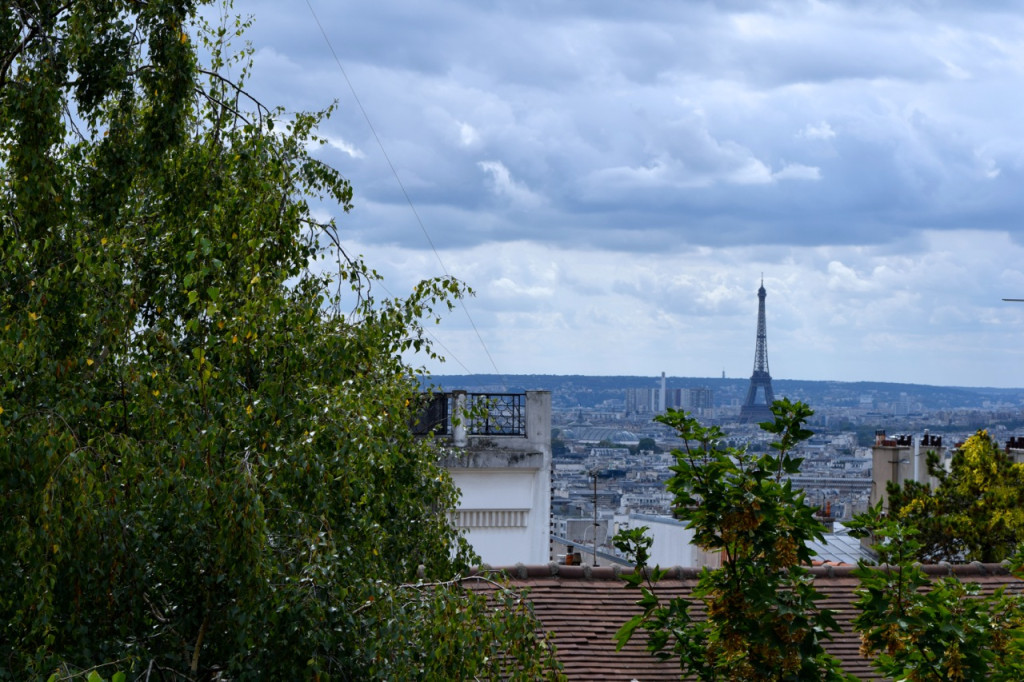 Sacre Coeur was packed to the gills both inside and outside. Buskers lined the main steps up along side the funicular so we were pleased to have avoided this gauntlet, arriving by way of backstreets.  There are creative ways to get an unobstructed view of the Eiffel Tower. My preferred vantage point is out the door of the Cathedral, go right and around the corner to the wrought iron gate, stand on the wall (have someone hold your back for safety) and hold the camera up over the top of the fence. 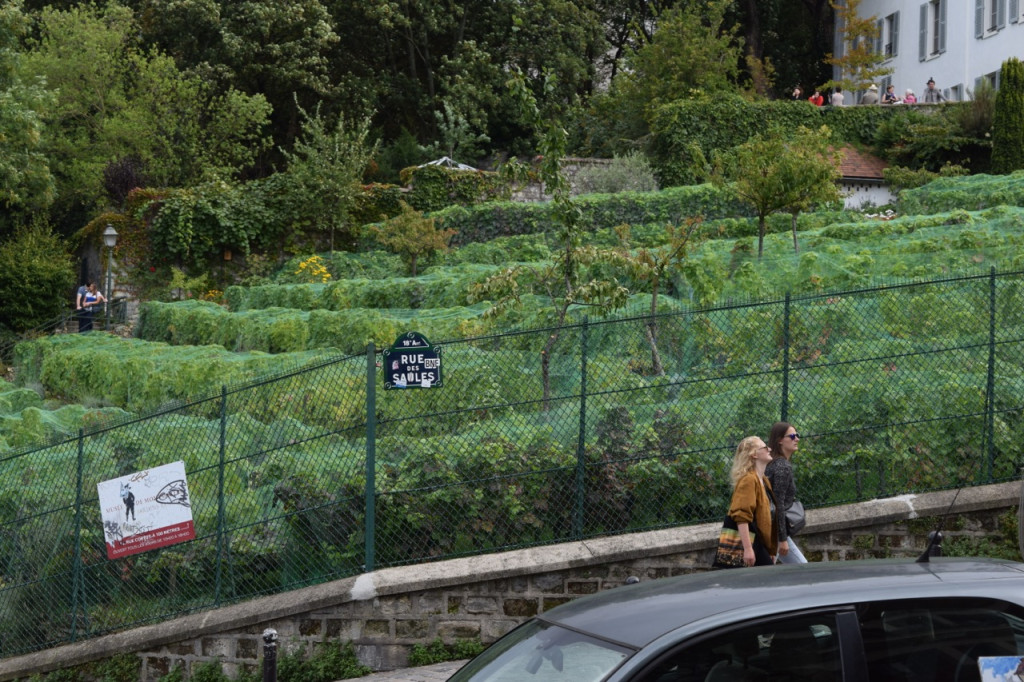 Behind the Basilica and a bit down the hill is Paris’ oldest and last wine producing vineyard. Nearly ready for harvest, we were able to see the robust vines and the healthy bunches of grapes growing on them this time of the year. 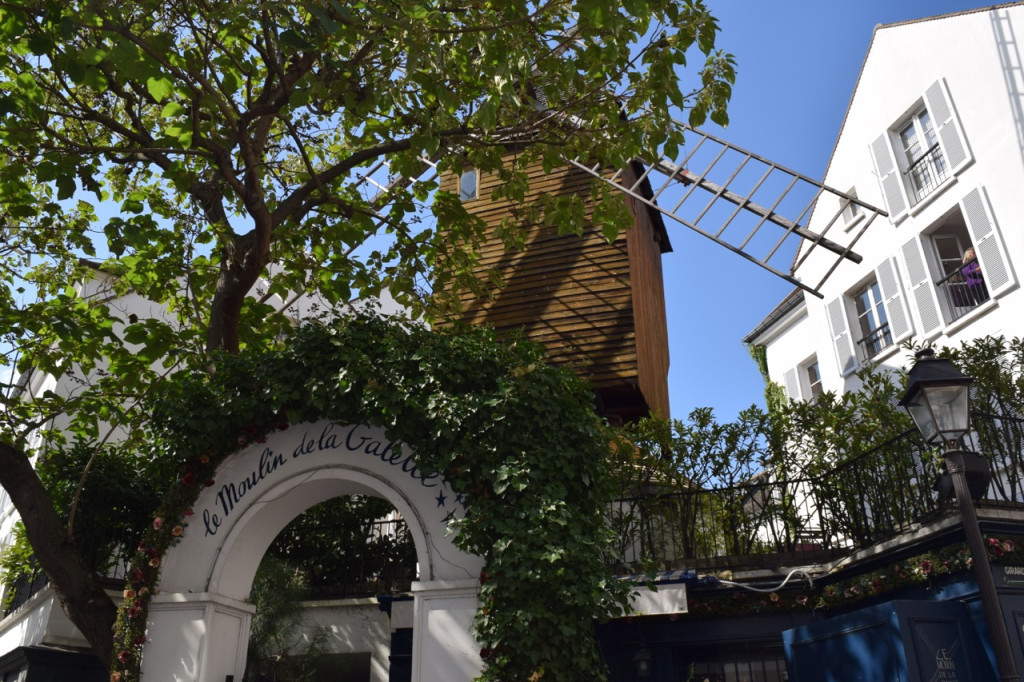 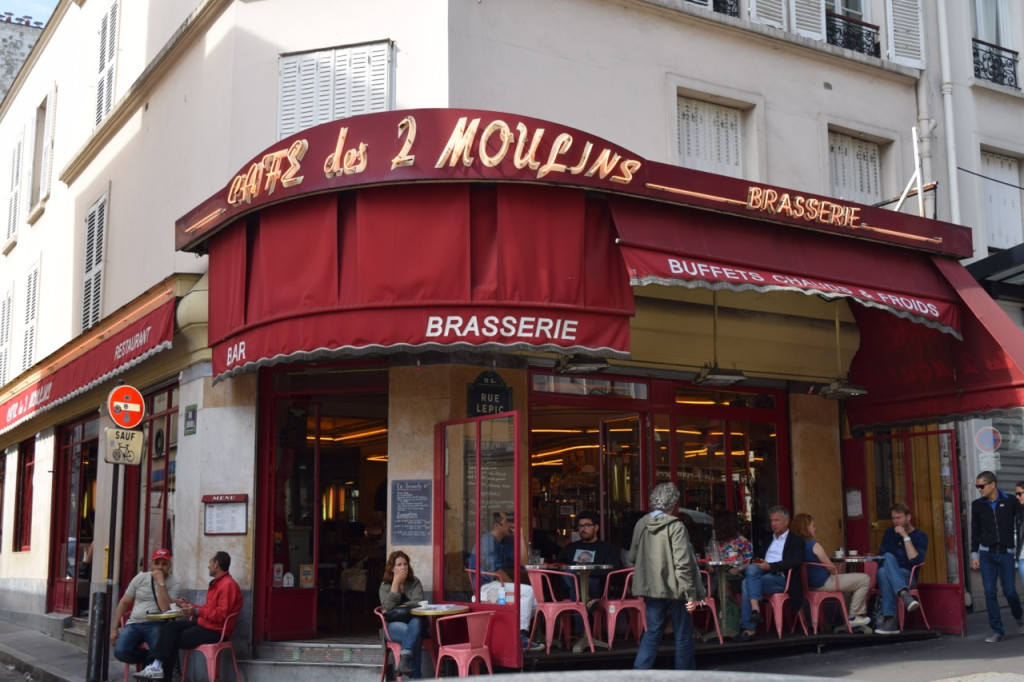 The last “tourist” or significant landmark we passed was the Café de 2 Moulins, the scene where the famous French movie The Fabulous Destiny of Amélie Poulin was filmed. 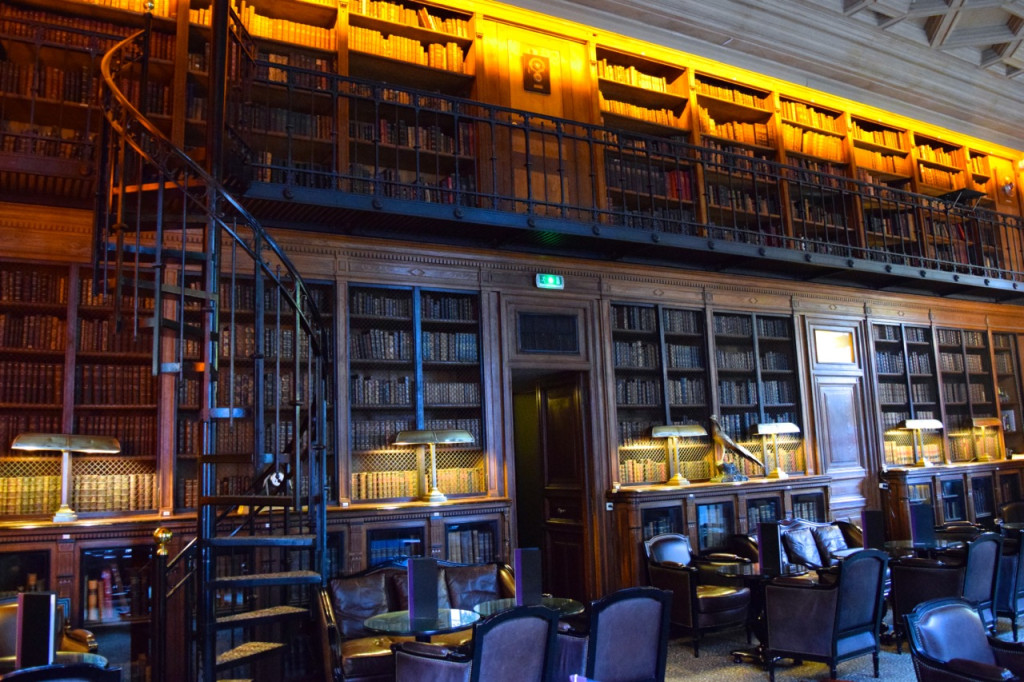 Exhausted from a hard day’s trek up and down cobblestone streets, we retreated to our rooms at Hotel Saint James to rest before dinner. Le Bar was empty which afforded me the opportunity to take a snap of the impressive two story library-like room. 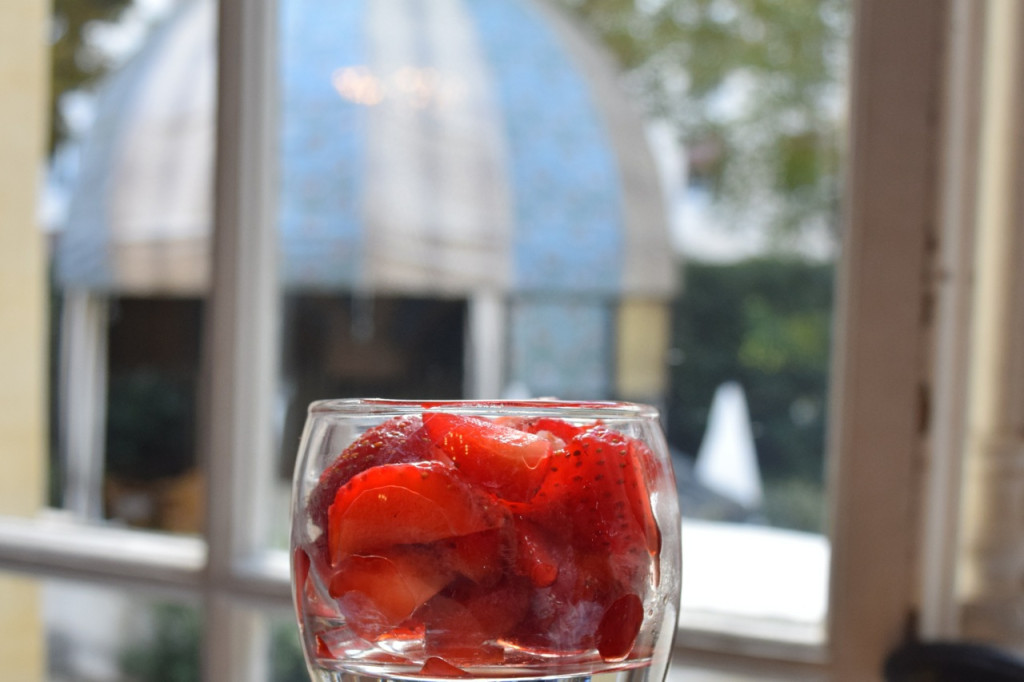 After dinner the group convened to recap the day’s events in Mr. Weekend In Paris and my suite. We toasted the successful finding of Montmartre’s hidden gems and climbing all those steps, from the bottle of Taittinger Champagne compliments of the Saint James, a Relais & Chateaux property. Merci beaucoup for our special treat! We enjoyed our day from breakfast right until it was time for light’s out!

All photos are the property of The Weekend In Paris.