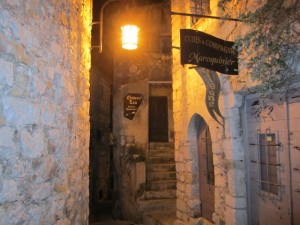 Gal Pal Elizabeth and I were dropped off at the bottom of the famous village Eze near Monaco, by taxi for an epic vertical journey in heels for the meal of a lifetime. Something special is how restaurant Château Eza was described, and the town of Eze was pitched as being charming and old-world. “Get there early” and check out the little shops along the way up to the restaurant, was the advice. “Stop at the church near the top for a sweet treat to see a peaceful retreat” another enthusiast chimed in. It was peaceful all right – it was dead quiet. I would put the emphasis on dead because we were nearly dead by the time we arrived at the church and discovered we were only half way to the restaurant. 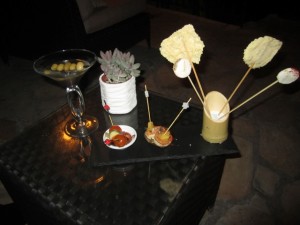 The ghost town we assented was barely lit with the last bits of a setting sun when we began our trek. It was pitch black by the time we were out of the church (we lite candles inside) and headed to dinner. Elizabeth was in high heels and navigating the ancient, uneven cobble stone pathway delicately at first, and then painfully towards the end. At one point, she sent me on a recon mission to make sure we were going in the right direction while she paused down further. We did not see another person from the time the taxi let us off until we were nearly at the top when a bellman from the Château Eza Hotel sped by shouldering someone’s luggage like a Sherpa with home field advantage, making a bee line for the summit of Mount Everest. Breathless we pressed on cheered up by the fact there was life nearby. 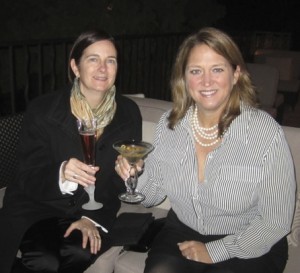 Finally, we reached the summit and the maître d’ seemed surprised that no one told us that it was a day hike (slight exaggeration) to reach them. Before we got too depressed thinking about how the hell we were going to get back down, I ordered a glass of 2005 Tattinger Rosé Champagne and Elizabeth (my martini reviewer) chose a Vodka Martini, dry with beaucoup olives. We sat outside on the now dark deck, having missed the more spectacular views, but happy to rest for a bit and star gaze. Out came a gorgeous array of unique appetizers on a slate tray that set the tone for a fantastic meal! Maybe the hike would be worth it after all.

Chef Alex Wagner and his team put on an incredible feast. Two tasting menus were offered, we thought we chose the shorter menu, but lucky us, my French was not understood well so we wound up with the full dégustation. We split a bottle of excellent wine: Les Gravières Santenay 1er Cru from the house of La Pousse d’Or.

Here is what we dined upon with my very rough translation:

Cream of chestnuts with smoked Pheasant, small flan of celery with garlic confit

Monkfish with fennel confit, bathed in a sauce of rock fish

Country lemon granite (I don’t remember what this was), with its flickering jelly Ice Wine

Precious poached breast of chicken on a bed of spinach, topped with an Albufera sauce and black truffles

Bitter hearts of chocolate with Jasmin surrounded by berries 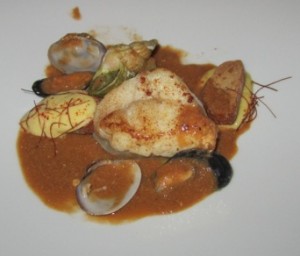 The stars twinkled before us as we sat in a room with glass views from the highest peak around while we dined on the elegant and artfully plated courses. One dish was more beautiful than the next. We savored each creative and palette pleasing morsel and held our breath while we waited for each dish to be unveiled. The service was sheer perfection – timed well and served with a smile. 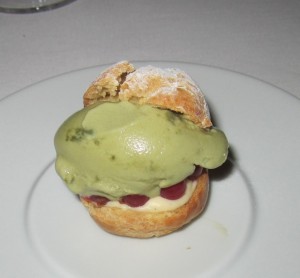 A taxi was dispatched to be waiting for us when he descended, but we cautioned them to make sure that they knew it might take us a few minutes for going down proved almost as challenging as going up – completely stuffed, full of cocktails and wearing heels was a recipe for a disaster! We walked as the European women do, arm in arm laughing at our predicament and our good fortune to dine among the stars. Calves burning, we made it down safely only to wait a while for our cab. Such was the evening, high’s and low’s – but completely awesome and certainly memorable! 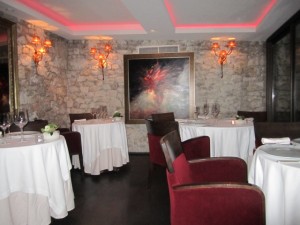 After thoughts: We visited here in the winter so the sun sets early. In other months, the shops and bars are open in the village until sunset so there will be much more for you to see and do along the walk up.  Wear comfortable shoes and bring a sac with your heels to change into for dinner. Your feet will thank you! Despite the challenges we faced – the cold, the steep walk, the dark, the creepiness – I would do it all over again!