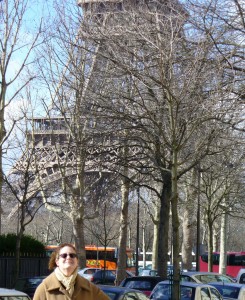 Kathryn, wintertime at the Eiffel Tower

In 2009, my company decided to launch a Twitter feed and I was part of the project team. To learn more and complement my work, I then signed up for a personal Twitter account.

I did some research about how people were using Twitter and then roamed around the site for a few days to see what people were talking about. Since I love to travel and have developed a (bad) habit of going to Paris a few times a year, I started following people who talk about Paris.

One by one, I started having conversations with the Paris experts and got to know them and their areas of expertise.

Looking for the most romantic take on Paris? Follow @kasiainparis. Want to know the hottest new places to get a cocktail? Follow @52martinis. Hungry? Follow @parisbymouth and @GirlsGuideParis. Looking for absolutely sublime, gorgeous photos of Paris? Then you must follow @littlebrownpen and @bbonthebrink and @Parisouailleurs.  And I found so many more that I can’t name them all….

I ended up meeting several people from my Paris Twitter list at an in-person tweet up in May 2010, planned by the lovely Dali of @ParisGetaways. What a great time meeting Dali and Marlys from @ParisBuFF; Sion, who tweets as @Parisimperfect; and Lindsay, who has an all-around fab blog called @LostNCheeseland…

I made a promise to myself then that I would plan tweet-ups when I visited Paris and try to go to others.  (Any excuse to visit Paris, right?) So naturally, when I found out that a tweeter and Paris blogger I particularly liked, Priscilla of @WeekendInParis, was planning an in-person party/tweet-up in Paris in January 2011, I said “I’m there!”  Priscilla has a blog with all sorts of helpful Paris tips, and travels to Paris every year with a group of friends. I was thrilled to meet her in person at her events in both 2011 and 2012 and also met more people from the Paris gang who have become good friends. 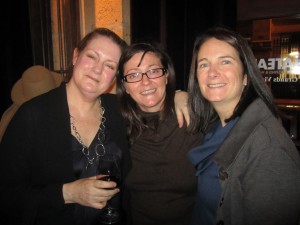 Going forward, I wouldn’t miss one of Priscilla’s tweet-ups in Paris, and we also met once with other Twitter folks in (gasp) my hometown of New York City!  Her next Paris event is in January 2013, and I already have my tickets…

I feel very lucky to have met such wonderful people (like Dali, Marlys, Priscilla, Forest, Kasia, Doni, and so many others) through Twitter. When I say Twitter changed my life, I sometimes get some strange looks. That’s ok, I’m a New Yorker – we’re used to that!

Kathryn Reichert is a social media and corporate communications strategist who spends her days working for a Fortune 100 financial services company. In her off hours, she dreams about when she can return to Paris, sit at a cafe all day, and write. You can follow her on Twitter at @knreichert and Pinterest at knreichert.