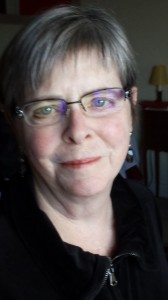 I have to do it. We stay in Paris too long for my short hair not to need cutting. It’s something I do every trip. I’ve been to the name salons, Jacques Dessange and Franck Provst, big and busy. I wanted something a little more personalized this time for my Parisian haircut. I decided to try a salon in the neighborhood, Jean Claude Biguine, on Rue Grennelle in the 7th, a short walk from our apartment and the Rue Cler Market. (I discovered only back in the US that there are hundreds of Claude Biguine salons spread around the world.)
Read More 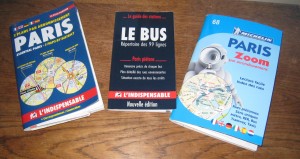 Navigating Paris by bus, metro and foot by Contributor Margo Waite Often I get calls from friends, or friends of friends, asking me about my travel experiences in Paris. They want to know what French guidebooks are the best, how to get around in the city of light, and what pre-trip reading they should do. While many Weekend in Paris readers are experienced travelers, I hope you find these suggestions of interest. And of course I’d love to hear your tricks that make your travel less stressful.
Read More 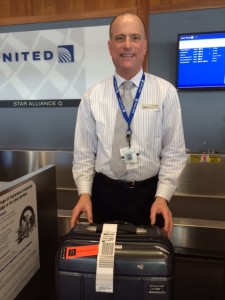 Tim D. from United Airlines Last month one of my sisters had her bag delayed from Boston to Paris when her original flight was cancelled and she was rerouted on another airline carrier. While sometimes understandable when weather delays wreak havoc with airlines, it was extra stressful for her because the gate agent failed to give her the baggage claim ticket to more easily track her missing suitcase. Today, I received a helpful tip from a Tim D. at United’s Providence Airport for tracking lost luggage that I think will help us all avoid anxiety in the future.
Read More 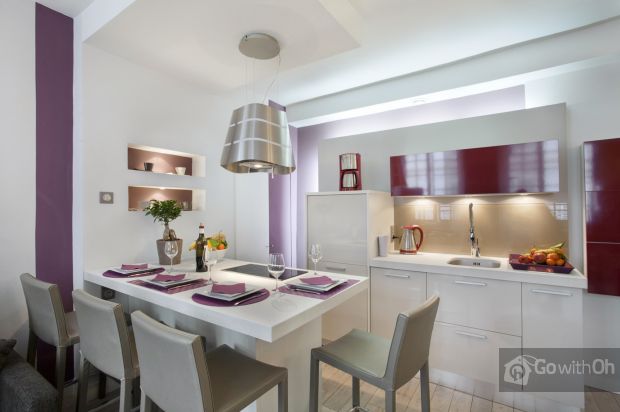 Photo courtesy of Go With Oh In a couple of weeks I am headed to Paris again and trying something new. I will be staying in an apartment with my two sisters. My philosophy has always been that as soon as we arrive in Paris we need to head to the hotel, dump our bags and Go! Since we will be staying in an apartment provided by the company Go With Oh in Paris, I am changing Gal Pal Rule #10 to Go, Go, Go with Oh! Oh the places we will Go!
Read More

The third of my Christmas markets in France, Menton was a place I had never heard of until my Parisian friends Michael and Marlys announced they were moving there. I was in Monte Carlo and could not pass up the chance to visit this adorable couple in nearby Menton. They met me in Monaco and we traveled together by astonishingly cheap bus (1.50€) for an afternoon of Christmas market shopping and local sight-seeing.

The best, most wonderful Christmas Creche on display was in Menton, close to the markets. Its simplicity, combined with the gorgeous colorful architecture surrounding it, made this peaceful corner in Menton one of my favorite stops in the Côte d'Azur. I loved that the Creche was placed next to a replica of the village of Menton and that the entire scene was modest and beautiful like the locals themselves.
Read More 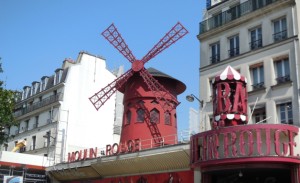 The famous Moulin Rouge There's more to Montmartre than meets the eye. It is usual for most tourists (myself included) to pop out of the Métro at Abbesses and head straight up the hill to Sacre Coeur to the highest point in Paris to check out the spectacular views of the city. On a very clear day you can see for miles and appreciate just how large a city Paris has become. We took a walk with Context Travel Paris docent Marie Dessaillen on our History Walking Tour of Montmartre and were quite surprised at the many things we saw and learned in the course of just three short hours.
Read More 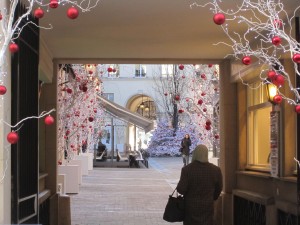 While I am usually a fan of shopping at independent boutiques in Paris, I do love to check out what's new and hot at the luxury fashion chains like Chanel and Dior. Luckily, shopping in Paris at Le Village Royal makes you feel as though each shop is an independent boutique. The petit village is accessed through an archway off rue Royal and leads you into the interior of a mansion block courtyard that connects to the opposite mansion block of rue Boissy-d'Anglas. Shopping in Paris at Le Village Royal at any time of year is quite a treat, but at Christmas time it is pure joy. The decorations last year where whimsical and cheery.
Read More

17 Nov The Best Stained Glass Windows in Paris and France 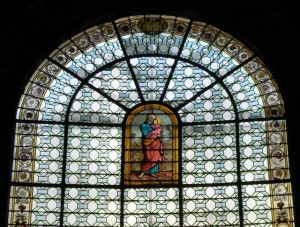 A remarkable amount of stained glass windows have survived the test of time, wars and natural disasters in France. Picking the best stained glass windows in Paris and France is an impossible task. I have seen but a mere slice of the possible choices. There are hundreds of them in Paris and thousands upon thousands France-wide in large and small villages. At first glance, many appear similar, however to the trained eye they are quite different and reflect the artistic styles of those who created them over multiple centuries. The rosettas in the Cathedrals of Notre Dame Paris and Reims are magnificent and among the best examples stained glass windows in Europe.

The windows below represent a small sample of my favorites so far in France. I look forward to sharing more with you from my future travels. What are your favorites?

13 Nov A Peek Inside Saint-Sulpice: Best Organ Music in Paris 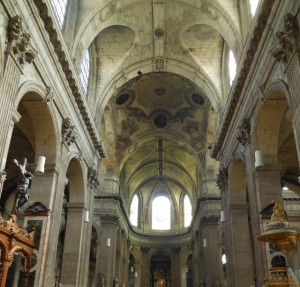 Although Saint-Sulpice seems diminutive compared to Notre Dame, it is only slightly smaller. It is actually Paris’ second largest church. Its Roman roots date back to the 13th Century but the bulk of the construction and renovations were done much later in the early 1600’s.  A new sanctuary, ambulatory, transept, portal and chapels were added on in the latter part of the 17th Century and into the 18th. Often overlooked for the more popular churches like Notre Dame and Sacre Coeur, its claim to fame is that Saint-Sulpice is home to the best organ music in Paris. People flock from all over to see and hear the organ that is one of the greatest in all of Europe.
Read More 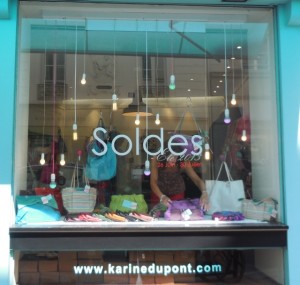 Keeping up with the ever-changing fashion world of accessories can be overwhelming and very costly if you have teenage girls. Where can you find adorable, affordable accessories in Paris? I’ve got you covered. Karine Dupont Paris is the place to stay atop of the latest trends without breaking the bank. The brightly colored aqua façade of the stores set the fun tone of the Karine Dupont shops. While shopping here is fun any time of year, the soldes (sales) times are particularly enjoyable where picking up already inexpensive pieces become major league steals when 50% or more off!
Read More
ABOUT Priscilla Pilon travels the world, but is an admitted Paris addict. She began her career as a food and travel writer through her own personal trips and her time spent living and working abroad. A true travel chameleon, she can find herself skiing in the French Alps one day and snorkeling in the British Virgin Islands the next. ...