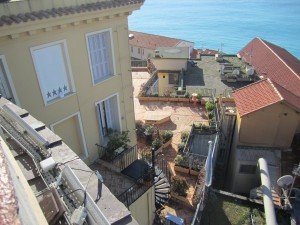 Colorful buildings contrasted with the bright blue sea[/caption] Old Town Nice has deep and complicated roots beginning with Greek civilization and provides us with some of the best sightseeing in Nice and France. According to Wikipedia, "Nice (Nicaea) was probably founded around 350 BC by the Greeks of Massilia (Marseille), and was given the name of Νικαία ("Nikaia") in honour of a victory over the neighbouring Ligurians (Nike is the Greek goddess of victory)". A long sordid history ensued and the people of Nice were co-mingled with roots from their Greek ancestors, Italian neighbors and seafarers who landed upon their shores and never left. The port of Nice was one of the busiest in the world and thus was a target for power-thirsty conquerors throughout the ages.
Read More

Known for its fresh seafood, Le Procope served Benjamin Franklin & Voltaire[/caption] A recent poor dining experience in Paris at one of the city's most historic cafés led one of my readers (Paul) to write a scathing review of one of my favorite restaurants. After reading what he had to say about Le Procope I began to wonder if the place was too far gone for me to recommend to anyone else (its been one of my favs for 20 years). After contacting Paul directly to see what happened - he had cold, bad food and very poor service, I asked if he spoken up at the time about his unsatisfactory situation to which he replied in the affirmative. It appeared that the waiter and the maître d' for the evening in question were both indifferent to his plight. Paul was understandably furious over the ruined evening which he had planned especially for guests himself and the bad taste lingered on for him long after the indigestion.
Read More

12 Sep Au Revoir to the Pistoletto Exhibition at the Louvre

Posted at 05:05h in Activities in Paris, Museums by Weekend In Paris 0 Comments

The Michelangelo Pistoletto Exhibition that just finished at the Louvre, symbolized by the sign of the “Third Paradise” infinity loop which is displayed front and...

10 Sep Priscilla’s Tips: Dealing with the Louvre When Crowded

Posted at 14:29h in France, Museums, Paris by Weekend In Paris 2 Comments

The most hunted woman in the world by the paparazzi was not Princess Diana, nor is it Kim Kartrashian (oops, I meant Kardashian), it’s actually...

Posted at 12:22h in Food, France, Hotels Paris, Outside Paris - Travel to other Cities by Weekend In Paris 1 Comment

Posted at 11:23h in France, Travel Tips, Wine by Weekend In Paris 3 Comments

Posted at 09:12h in Food, France, Restaurants Paris by Weekend In Paris 0 Comments

I'll admit it, day one in Paris is exhausting and when it comes time for booking dinner reservations for the first jet lagged night's dinner...

02 Sep Outside Paris: Where to Eat In Giverny En Plein Air

Posted at 12:37h in Giverny, Outside Paris - Travel to other Cities by Weekend In Paris 2 Comments

Giverny was particularly spectacular the day we toured Monet's gardens and there was so much background information our docent Marie Dessaillen from Context Travel Paris...

Posted at 08:51h in France, Travel Tips by Weekend In Paris 2 Comments

[caption id="attachment_6738" align="alignleft" width="216"] Found my real artist in Montmartre[/caption] Montmartre is synonymous with art. The Impressionistic movement was born and raised on the highest hill...

Posted at 03:30h in Activities in Paris by Weekend In Paris 3 Comments

French Waterways - water any which way I say! Each week there is something on Twitter called #FriFotos. It is a "virtual" chat with a...

Read More
ABOUT Priscilla Pilon travels the world, but is an admitted Paris addict. She began her career as a food and travel writer through her own personal trips and her time spent living and working abroad. A true travel chameleon, she can find herself skiing in the French Alps one day and snorkeling in the British Virgin Islands the next. ...